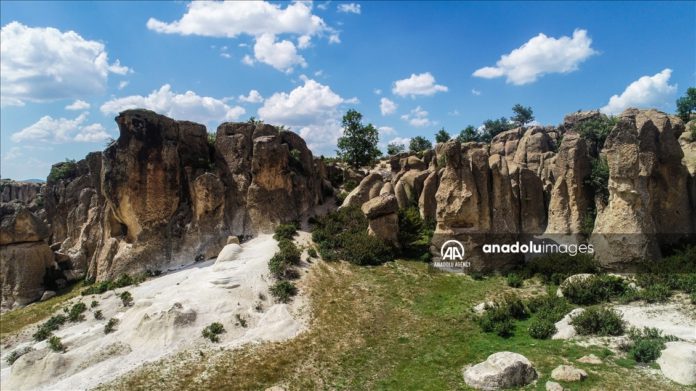 A hidden gem in the ancient Phrygian Valley has become an alternative tourist destination in western Turkey with the many historical places and “fairy chimneys” it boasts.

Uclerkayasi village in Ihsaniye district of Afyonkarahisar province is a “hidden paradise,” according to Tanju Tetik, head of the Phrygian Culture Foundation.

Noting that there are many Phrygian artifacts in their village, he said more tourists are visiting the region with the increased tourism investments under the leadership of Afyonkarahisar Governor Gokmen Cicek.

The village offers a glimpse of the lives of Phrygians with open-air temples, rock tombs, living areas in single and multi-story rock-carved houses, wine cellars, dungeons, king’s tombs and fairy chimneys which are as old as 3,000 years.

“We can call here the mysterious village of the Phrygians. Recently, this mystery has started to slowly disappear,” Tetik said.

Saying that the area has become well-known by the people, he added that Emre Lake and Ayazini village in the region are also famous.

“Local and foreign tourists stop by Uclerkayasi village when they see the rock settlements on the way while visiting these areas. The number of tourists coming to our village is increasing day by day,” he said.

Aziz Ahmet Ozdemir, who runs a restaurant and boutique hotel in the village, said there is a large number of European visitors coming to the region.

Inscribed tentatively on the UNESCO World Heritage List, the Phrygia Valley spreads across the capital Ankara and central Eskisehir as well as its neighbors in the Aegean region, Kutahya and Afyonkarahisar.

According to the United Nations Educational, Scientific and Cultural Organization (UNESCO), Phrygia is a civilization that existed in 800 B.C. and dominated central Anatolia from the Mediterranean Sea to the south and Black Sea to the north.