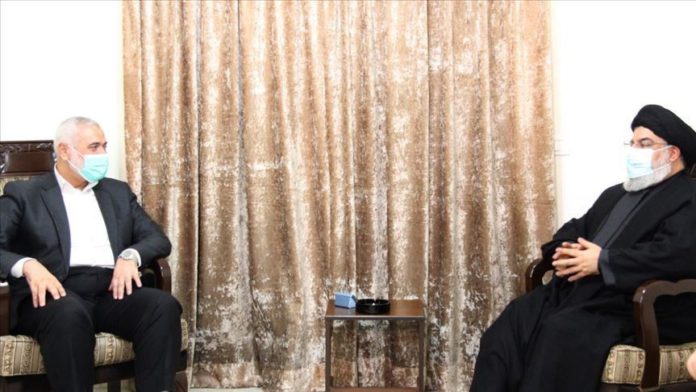 Hezbollah Secretary-General Hassan Nasrallah held talks in Beirut with Hamas chief Ismail Haniyeh and his deputy Saleh al-Arouri, according to the Lebanese group.

The talks covered the “latest political and military developments in Palestine, Lebanon and the region,” Hezbollah said in a statement.

The two group leaders also discussed “the hazards facing the Palestinian cause, particularly the US deal of the century and projects for normalization with Israel,” the statement said.

This January US President Donald Trump announced the so-called “deal of the century,” which refers to Jerusalem as “Israel’s undivided capital” and recognizes Israeli sovereignty over large parts of the West Bank.

The plan calls for the establishment of a Balkanized Palestinian state in the form of an archipelago connected through bridges and tunnels.

The Hezbollah statement reiterated “the strength of the resistance axis in the face of all pressures and threats.” It also underlined the strong relations between Hezbollah and Hamas.

Haniyeh is currently visiting Lebanon for talks in the wake of a US-brokered deal between the United Arab Emirates (UAE) and Israel to normalize their relations.

Lebanon is home of more than 174,000 Palestinian refugees.