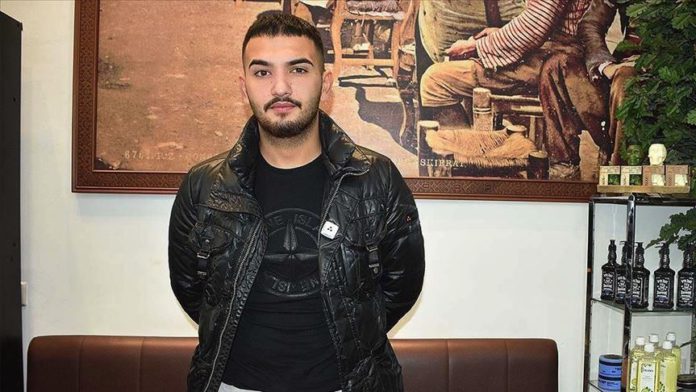 A heroic Turk hurled himself into a hail of bullets in Vienna Monday night, risking his life to save both an injured women and a police officer from terrorist attack.

Speaking to Anadolu Agency Tuesday, Recep Tayyip Gultekin said he was hoping to sit in a cafe with his friend Mikail Ozen that fateful night, before a new coronavirus lockdown came into effect.

But when he saw a woman injured by the terrorist attack, he jumped in to move her out of harm’s way, heedless of the risk he would certainly face.

After taking the woman to a safe spot, Gultekin himself was in the line of terrorist gunfire, and took a bullet to the leg.

After speaking to the police and aiding an elderly woman in shock due to the attack, he saw a police officer also injured by the terrorists, and again moved to help, despite his own bullet injury.

“Other policemen were watching, I shouted at them for help, but they didn’t do anything.

“I said to Mikail, we’ll handle this,” he related.

After reaching the injured officer, they carried him to an ambulance, said Gultekin: “I was holding him from his back, and Mikail was carrying his feet.”

The officer had been injured between the abdominal cavity and calf and lost a lot of blood, Gultekin said.

The paramedics wanted to take Gultekin to the hospital but he refused because there were many people suffering injuries, he added.

Later, after making his way to the hospital, doctors told Gultekin the bullet pellet might have to stay in his leg as removing it might cause problems.

Saying that he lives in Austria and makes his living here, Gultekin said: “The police who were injured were my police. The people injured were my people. I give my condolences to the Austrian state and hope the injured people make a quick recovery.”

He added: “If the same thing happens tomorrow, I wouldn’t hesitate to save people. I don’t want to see discrimination between Muslims, Jews, or Christians. Terror has no place in these religions. Terror is terror everywhere.”

In a Twitter post, Nikolaus Meyer-Landrut, the EU ambassador to Turkey, also thanked the two heroes for their help to the injured.

Quoting Turkish Foreign Minister Mevlut Cavusoglu’s tweet on Gultekin and Ozer, the ambassador said: “Mr. Minister, we thank Turkish citizens Recep Tayyip Gultekin and Mikal Ozer for helping those injured in the attacks in Vienna and congratulate them.”

“We are ready to fight against all racist attacks together in cooperation,” he added.

At least four people died and 17 more were wounded in the terror attack in Austria’s capital on Monday evening, authorities have confirmed.

The injured include a police officer, according to the Vienna Police Department.