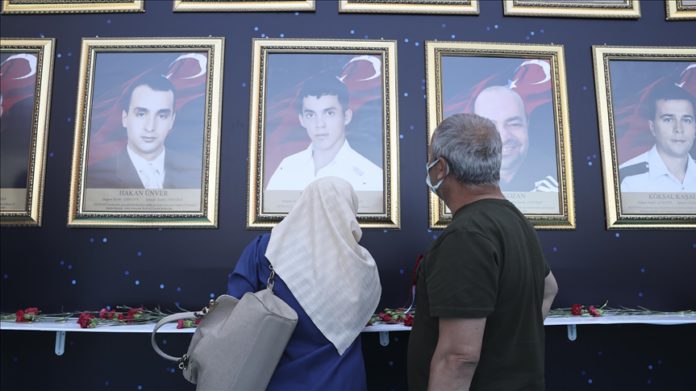 Relatives of those who lost their lives on July 15, 2016, when the FETO terror group attempted to seize power through a military coup, remembered their loved ones on Thursday.

July 15 is now marked as Democracy and National Unity Day in Turkey, a national holiday, every year. Commemorative events are organized across the country.

A memorial was held at the Edirnekapı Martyr’s Cemetery, one of the largest burial grounds in Istanbul, where weeping families recited the Quran and prayed for the fallen. They cleaned their graves and decorated them with flowers.

Mahir Ayabak, a 17-year-old who perished on night of the bloody coup attempt, also takes his eternal peace in the cemetery. His father, Zahir Ayabak, said his son was shot dead by FETO putschists at Istanbul’s Ataturk Airport.

Atilla Aydiner, mayor of Istanbul’s Bayrampasa municipality, said it was the people’s efforts that foiled the coup attempt along with President Recep Tayyip Erdogan’s call for citizens to take to the streets against coup plotters.

FETO and its US-based leader Fetullah Gulen orchestrated the 2016 defeated coup in which 251 people were killed and 2,734 wounded.