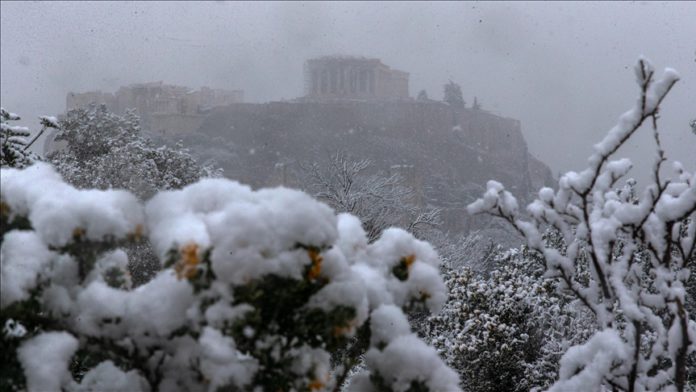 A severe weather front dubbed Elpis hit Greece’s capital region of Attica with snow Monday as well as the Cyclades islands in the Aegean Sea.

Athens was affected, with the ancient Acropolis covered in thick layers of snow, while several islands in the Cyclades experienced heavy snowfall as well.

According to the National Meteorological Service, below-freezing temperatures as well as heavy snowfall are the main characteristics of the weather front, which has also hit other parts of the country.

Attica’s northern suburbs have been covered in snow since the early hours of Monday with temperatures reaching minus 2 degrees Celsius (28.4 degrees Fahrenheit) and it is expected to worsen in the coming hours.

Snowstorms have also been recorded.

Elpis, meaning ‘Hope’ in Greek, has stranded several drivers on Attiki Road, which leads to the airport with long lines stuck on the highway due to heavy traffic, while many flights have also been cancelled or delayed.

Disruptions have also been recorded with trains and trams.

Authorities have urged citizens to avoid unnecessary movement as roads have turned into ice.

Schools will remain closed throughout Attica on Monday and Tuesday due to the extreme weather conditions and the Athens-Lamia National Road as well while snow clearing vehicles are trying to clear the way.