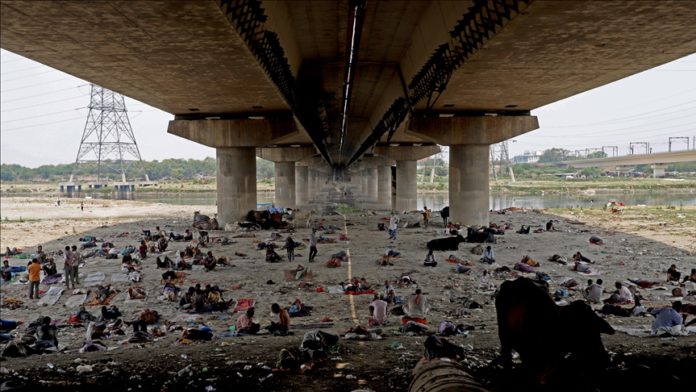 Coinciding with World Climate Change Day, which is being observed on Sunday, experts in India have raised alarm over the susceptibility of the country to environmental issues.

India is currently witnessing an intense heatwave, with the India Meteorological Department saying that country has recorded its warmest March in 122 years.

Speaking to Anadolu Agency, Mohammad Farooq Azam, who studies glaciers at the prestigious Indian Institute of Technology, said the ongoing heatwave in India and other South Asian countries is an example of climate change.

“The last March and April months have been the hottest over the century and ongoing May is expected to be hotter by 3 degrees Celsius than the average temperature in May,” he said, adding that heatwaves cause severe damage to our society and other ecosystems.

Avantika Goswami, program manager at the Centre for Science and Environment, a leading New Delhi-based environmental think-tank, said India is losing around 101 billion work hours per year due to extreme heat.

“This will rise as global temperatures rise further. Our agricultural yield is already being affected by climate change, and so are the threats from sea level rise and extreme rainfall,” she said.

Stating that the frequency and strength of such heatwaves are expected to increase in India due to climate change, Azam said as climate change is a global phenomenon, its solution must be at a global level with the active participation of all nations.

“A sharp curbing of black carbon emissions at local as well as the global scale is needed to limit/reverse the imminent climate-change-related catastrophes,” he said.

While India is addressing the climate change issue by increasing dependency on renewable sources of energy, especially solar energy, Azam believes that there is a need to have more dedicated climate change research centers at the premier institutions in the country.

Goswami said while India is one of the most vulnerable countries to climate change, it has “emitted only 3% of carbon dioxide emissions since 1870, making us a very small contributor to the climate crisis.”

She called for a plan to address coal dependence and goals need stronger implementation domestically.

“We have fairly ambitious climate goals at the moment, focused mostly on decarbonizing our energy sector,” she said.

Suman Mor, chairperson at the Department of Environment Studies, in North India, based at Panjab University, said that climate models predict that India’s climate will change quickly, which will put more stress on the country’s natural ecosystems, agricultural output, and freshwater resources. She has recently completed a research project titled Improving adaptation strategies for climate extremes and air pollution affecting India.

“If mitigation and adaptation steps are not taken quickly, wisely, and on a large scale, the effects of climate change are likely to make it very hard for the country to keep up its fast economic growth and reach the sustainable development goals (SDGs) that UN member states agreed to in 2015,” she told Anadolu Agency.

The Indian government, on the other hand, is maintaining that it is implementing the National Action Plan on Climate Change, which is the overarching policy framework for climate action in India.

“Several other measures are taken, keeping in view the threat of climate change, by various departments, ministries, and entities of the Government, as part of their regular mandated activities and responsibilities. These are periodically shared with all stakeholders and the world through India’s National Communications and Biennial Update Reports submitted to the UN Framework Convention on Climate Change,” the government said in the parliament last month.