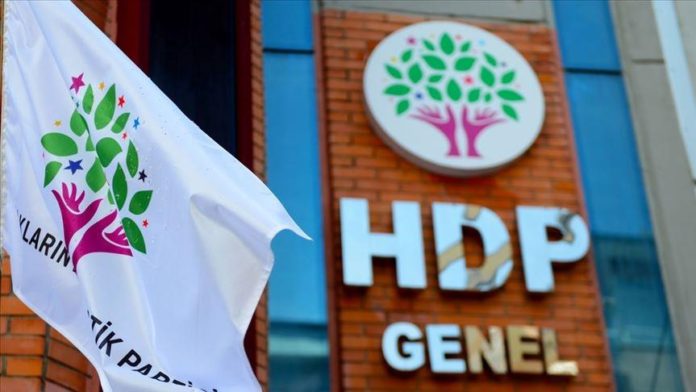 An indictment prepared by Turkey’s top prosecutor for the closure of an opposition party in the country accused the party of seeking to destroy the unity of the state and nation.

Bekir Sahin, the chief public prosecutor of the Supreme Court of Appeals, filed the indictment — seeking dissolution of the opposition Peoples’ Democratic Party (HDP) — at the Constitutional Court on Wednesday and the details of it were released on Thursday.

The 609-page indictment said the permanent closure of the HDP was a legal obligation for the indivisible integrity of the Turkish state, and peace and security of the nation. It said the party should also be fully deprived of the treasury grants.

HDP is linked with the PKK terror group like the parties closed earlier by the Constitutional Court and that it is the terrorists’ offshoot in legal disguise, as proved by the evidence put forth in indictments at various courts and court verdicts against the HDP members, as well as various terror activities — such as Oct. 6-8 events and activities of digging trenches — in previous years, it said.

The terrorist PKK broke a cease-fire in July 2015, followed by the self-rule declarations, which led to Turkish counter-terrorism operations against the group. The terrorists dug trenches for guerrilla warfare in southern cities of Turkey.

The indictment added that the party’s congresses, demonstrations, and meetings were not like the ones founded in accordance with the Constitution and laws, but like they are platforms where slogans supporting the separatist PKK terror group and its ringleader are chanted.

It said congress halls are decorated with the terrorists’ photos and the group’s rags, and added that they even perform a moment of silence for killed terrorists in their congresses.

The latest example was seen during the party’s fourth large congress in Feb. 23, 2020 and a probe was launched into the event by the prosecutors in the capital Ankara, it noted.

“The defendant HDP went beyond openly supporting the terrorist organization PKK/KCK and acted as an organ of it,” it said, adding that the PKK and HDP are no different.

It noted that co-chairs of the party Pervin Buldan and Selahattin Demirtas are projects of the group’s ringleader Ocalan, and the ringleader himself accepts this fact.

The indictment stressed that those who carried out the terrorist activities are not ordinary people, but senior members of the party, which poses a greater risk for the Turkish state’s independence, indivisible unity of the country and its nation.

“It is inconceivable that the statements of the defendant party that praise and sanctify the violence, terrorism, and terrorists, let alone condemning terrorism, are within the scope of freedom of expression,” it said.

The indictment emphasized that a political party’s support for terrorist activities in the disguise of political activities, trying to legitimize them, and even conducting such activities through its organs are unacceptable.

It is a known fact by everyone in the country that the defendant party, it said, is determined to use violence to reach its aim, which it shares with the separatist terrorists, of dividing the country based on race and forming a separate state.

The indictment also included PKK-related materials seized in party buildings, as well as files of investigations and trials against the executives and deputies of HDP.

The defendant party is taking refuge in the votes it received to legitimize its activities and statements — done sometimes in cooperation with the PKK terror group and sometimes under its directives, according to the indictment.

It said the remarks of Cemil Bayik, one of the so-called PKK executives, that “If it isn’t for the PKK, HDP cannot get 5% vote,” proves the mentioned situation.