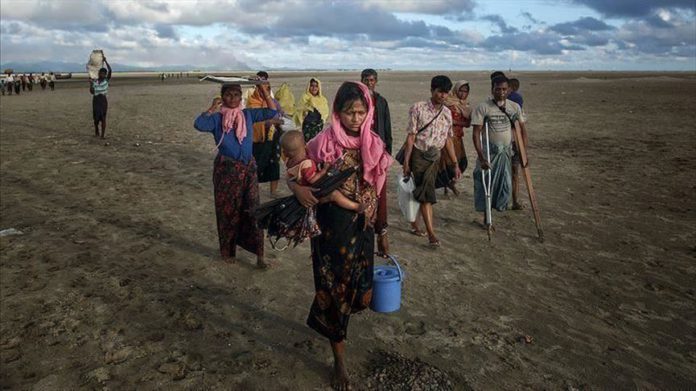 Coinciding the third anniversary of a brutal military crackdown by Myanmar’s armed forces on ethnic Rohingya Muslims, the wretched community members who have taken refuge in India feel vulnerable amid anti-Muslim sentiments.

Hundreds of thousands of Rohingya hailing from the western Rakhine state of Myanmar escaped from their country after Myanmar military launched a massive crackdown on Aug. 25, 2017 — which is called the textbook example of genocide by the UN.

As per the latest data, 18,914 Rohingya are currently registered with the UNHCR in India.

The community leaders say, although they were living under miserable conditions without basic requirements in their camps, they, however, felt safe, till hate campaign took over India some years ago.

The shift in the attitude of the Indian government became quite evident recently after three groups of Rohingya making up to at least 20 people, who had tried to enter the country from northeastern states of Assam and Manipur, were deported to Myanmar.

Sitting in water flooded makeshift refugee settlement in capital’s Kalindi Kunj locality, Ali Johar, a Rohingya youth leader said the community is feeling vulnerable over the past one year, due to pandemic and anti-Rohingya campaign.

The COVID-19 pandemic has brought further miseries to the community, as most of them were working in the unorganized sector. Since lockdown affected this sector quite heavily, they have lost their jobs, forcing them to live in poverty and hunger.

“Fear of hate and the uncertainty that brews since the introduction of the citizenship law, many have either tried to leave or convert. There has been a fear among the community due to hate campaigns and the general change in the attitude of people and government,” he said.

According to the new law, the six minority communities – Hindus, Sikhs, Buddhists, Parsis, Jains, and Christians – from the three neighboring countries, who migrated to India before Dec. 31, 2014, are eligible to apply for citizenship on the grounds of religious persecution.

Attempting to take advantage of the new law, many community members have reportedly converted to Christianity.

A prominent English-language, Indian daily The Economic Times, reported that many Afghan and Rohingya Muslim refugees have converted to Christianity to make themselves eligible for Indian citizenship.

While admitting that 160 Rohingya have changed their religion, Mohammad Sabir, a Rohingya community leader said these people had converted much before they left Myanmar.

In a statement, the Rohingya Christian Refugee Committee in India also said that the conversion did not take place for the lure of citizenship.

“Those practicing Christianity among Rohingya in India are considered Christians by the government of Myanmar as well since 2008,” the statement said.

Since 2017, many members of the Rohingya community in search of safe heavens have tried to seek refuge in India.

Johar confirmed that over 3,000 refugees, who were in India have returned to Bangladesh, despite the risk of crossing the border, to avoid getting deportation to Myanmar and the hate campaign.

“Bangladesh is now providing Rohingya decent healthcare and education. Most community members fear deportation and would prefer dying rather than going back. The Indian government has been vocal about deportation and thus they live in fear,” he said.

While UNHCR has provided refugees card to half the refugees from Myanmar, India does not recognize their status, since it is not a signatory to the UN Convention on Refugees.

More than 34,000 Rohingya were also thrown into fires, while over 114,000 others were beaten, said the OIDA report entitled, Forced Migration of Rohingya: The Untold Experience.