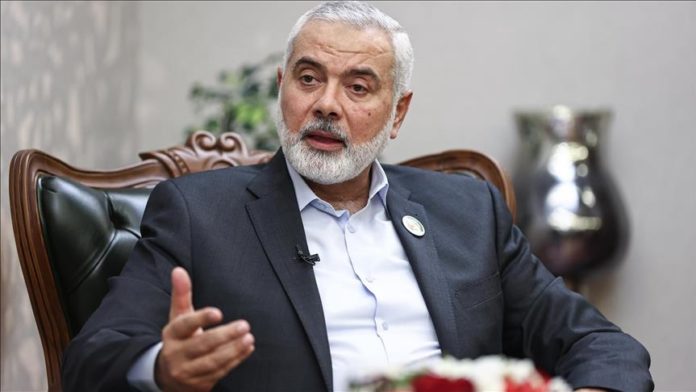 Speaking to Haberturk news channel in an interview, Haniyeh said they considered Turkey, Egypt, Iran, and Saudi Arabia as important countries in the region, adding that Turkey’s rapprochement with the said countries would affect the Islamic world and the Palestinian cause positively.

On Palestinian President Mahmoud Abbas’ decision to postpone the May 22 elections, Haniyeh said they want the elections to be held as soon as possible, stating such a move would end internal disputes in Palestine.

He stressed even if Hamas wins the elections they will create a joint government.

Ruling out any aims to dominate Palestine politically, he said they want to first and foremost liberate the occupied lands.

Touching upon the normalizing of relations with Israel by some Arab countries, he said such moves legitimize the Israeli occupation.

The interview comes just as Israeli attacks on Palestinians, the fiercest in years, came to a halt on Friday under an Egyptian-brokered cease-fire.

Tensions escalated across the Palestinian territories last month over an Israeli court verdict to evict Palestinian families from their homes in the Sheikh Jarrah neighborhood in favor of settlement groups. The situation worsened after Israeli forces raided the Al-Aqsa Mosque and assaulted worshippers inside.

The confrontation spread to the Gaza Strip, with Israel launching airstrikes that killed at least 248 Palestinians, including 66 children and 39 women, and injured more than 1,900 others. Health authorities in the West Bank also confirmed 31 killed in the occupied region, totaling 279 across all Palestinian territories.

Twelve Israelis were also killed in Palestinian rocket fire from the Gaza Strip.

At least 2,000 buildings were completely destroyed and 15,000 buildings became unusable in the Israeli attacks on the enclave, according to the Gaza-based Palestinian Ministry of Labor and Housing.

Some four mosques and dozens of police stations were completely destroyed in the attacks, while many factories in the industrial zone became unusable.

Putin to take part in Berlin conference on Libya