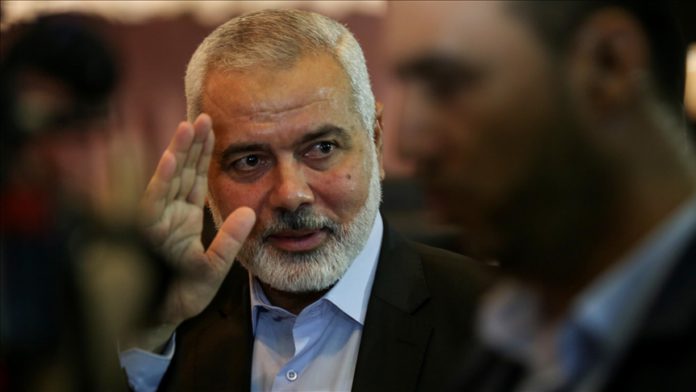 Hamas chief Ismail Haniyeh will arrive in Lebanon on Sunday as part of a foreign tour that includes a number of Arab countries.

Haniyeh will meet with a host of Lebanese officials during his visit, including President Michel Aoun, as well as leaders of Palestinian factions in Lebanon, Hamas said in a statement.

The Palestinian group said Haniyeh’s talks in Lebanon will focus on Palestinian developments, including the “victory of the resistance factions” during the recent fighting with Israel.

An Egyptian-brokered truce on May 21 ended 11 days of fighting between Israel and Palestinian resistance factions in Gaza that erupted against the backdrop of an Israeli court ruling to evict Palestinian families from their homes in the Sheikh Jarrah neighborhood in occupied East Jerusalem.

At least 260 Palestinians were killed and thousands injured in Israeli attacks in Gaza, while thirteen Israelis were killed by Palestinian rocket fire from the seaside territory.

Haniyeh will also discuss the plight of Palestinian refugees in Lebanon with officials in Beirut, Hamas said.

A total of 475,075 Palestinian refugees live in Lebanon and their number rises to 600,000 with the unregistered refugees, according to UN data.

Haniyeh’s current tour has already taken him to Egypt, Morocco, and Mauritania.

Hamas seeks to revive support for the Palestinian cause during the tours, confront the wave of normalization of relations between Israel and Arab countries, and rally support against the Israeli occupation of Palestinian lands.

Last year, four Arab countries — the United Arab Emirates (UAE), Bahrain, Sudan, and Morocco — normalized their relations with Israel, a move Palestinians described as a “betrayal” of their cause.