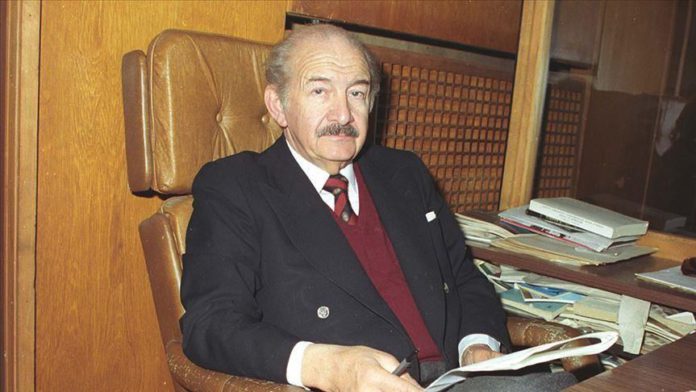 Taner, also a renowned playwright and shot story writer, was born on May 16, 1915 in Istanbul to a family of bureaucrat Ahmet Selahattin Bey and Seza Hanim.

Following his father’s death when he was five, Taner and his mother moved to the residence of his grandfather Ismail Hamit Bey, who was the head of the first printing house established during the Ottoman period.

After graduating from Galatasaray High School in 1935, Taner started his higher education in economics and politics in Heidelberg University in Germany. He had to drop out of school as he suffered from tuberculosis and he returned to Turkey in 1938.

In 1946, Taner’s first short story Tohmet (Indictment) was published in Yedigun magazine. He later wrote vignettes plays, cabarets, scripts and satires in many other magazines. He also wrote a book – titled Long Live Democracy – in 1949.

He won the first prize in the international competition organized by New York Herald Tribune in 1953, for his short story – titled It Was Raining in Sishane. He was also chosen as the favorite storyteller of the year in 1956 by Varlik magazine.

He went to the Max Reinhardt the University of Music and Performing Arts in Vienna, Austria in 1954 and continued his education for two years. He also worked as an assistant director in some theaters in Vienna.

Taner’s book Onikiye On Kala (One to Twelve), published in 1954, became the first book to receive the Sait Faik Story Awards that was launched in 1955.

Being a successful writer, Taner also focused in theaters since 1960s and pioneered the establishment of the cabaret theater in order to present critical plays on current events.

Taner, along with his colleagues Ahmet Gulhan, Zeki Alasya and Metin Akpinar, established Devekusu Cabaret Theater in Istanbul in 1967. The theater reached a wide audience with its unique style.

In 1968, he established Language and Culture Center Private Theater School. Next year, Taner and his colleague Munir Ozkul established Bizim Tiyatro (Our Theater). He and Gulhan also established Tef Theater Company in 1978.

Taner also wrote columns for Tercuman and Milliyet newspapers for many years.

The Ballad of Ali of Keshan: Turkey’s first epic theater

Taner’s Kesanli Ali Destani (the Ballad of Ali of Keshan) was Turkey’s first epic theater. First staged in March 31, 1964 in Istanbul, the play was later staged in Germany, England, and then Czechoslovakia and Yugoslavia.

The Ballad of Ali of Keshan tells the story of Ali, who lives in a ghetto in Istanbul and is sentenced to prison for a crime he did not commit. However, Ali becomes a hero for his alleged murder of a much-hated bully. He assumes the personality that his environment forces upon him, and at the end, he actually becomes a murderer.

Later in 1969, Taner was awarded by the International Festival of the Humor of Bordighera Award for his book Sancho’nun Sabah Yuruyusu (Morning walk of Sancho). He also grabbed Turkish Language Society Theater Awards in 1972 for his play Sersem Kocanin Kurnaz Karisi (Cunning Wife of Stupid Husband).

Taner often included human and human values, nature, life, time, psychological states, ability to choose, selectivity and abnormality in his stories. Focusing on social issues and dealing with every part of the society in his stories, Taner wrote in a cynical style using the individual’s lifestyle in society, the inconsistencies, contradictions and hypocrisy of people from different quarters.

The author also served in the UNESCO’s Culture Commission.

Known for his humble and graceful personality, Taner passed away at Haydarpasa Hospital in Istanbul on May 7, 1986. Upon his death, the Istanbul City Theater was named after him.

Since 1987, Haldun Taner Story Award has been organized by Milliyet newspaper.