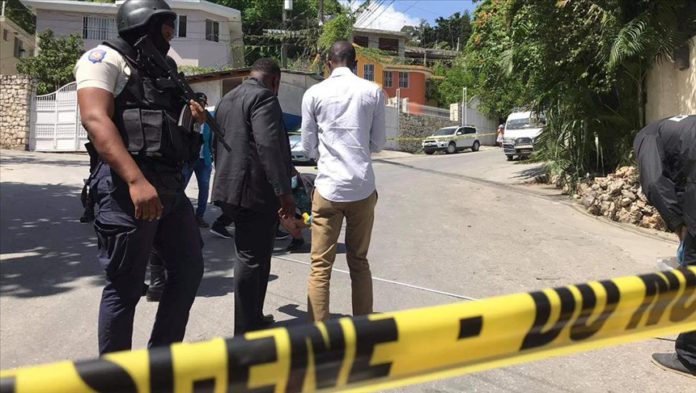 The Caribbean nation of Haiti has descended into chaos following the assassination Wednesday of its president.

A political crisis that developed over discussions about Jovenel Moise’s tenure, unfavorable economic conditions, the COVID-19 pandemic and the country’s increasing security problem stand out as the main reasons for the current instability.

As Haiti nears a plebiscite for constitutional amendments and presidential and parliamentary elections to be held on Sept. 26 to alleviate the soaring tensions in the country, the public remains hesitant to go to the polls over security concerns.

According to a report by the UN Children’s Fund (UNICEF) released on June 15, nearly 8,500 women and children have left their homes over the past two weeks due to escalating tensions between deadly gangs in the capital Port-au-Prince.

The report said people who had to abandon their homes took shelter in temporary places such as gyms and are in need of food, clean water, clothing and blankets.

UN data also showed that approximately 14,000 people had to abandon their homes in the last nine months as gangs took control over some regions of the country.

Pierre Esperance, executive director of the National Human Rights Defence Network, has expressed concern over the surge of violence and warned that the situation would deteriorate if Moise continued in his duties.

Moise came to power after controversial presidential elections in Haiti in 2015. He had previously made investments in the fields of agriculture and industry in the country as a businessperson and served as the secretary general of the Chamber of Commerce and Industry of Haiti.

Encouraged by former President Michel Martelly, Moise became a candidate in 2015 for the liberal-leaning Tet Kale Party, which was formed by Martelly.

Moise finished first in the polls, receiving 32.8% of the vote in the first round, in which as many as 54 candidates competed, according to the official results.

However, some exit polls showing fewer votes for Moise caused controversy in the country, which prevented the holding of the second round of elections.

He won the next elections in 2016 in the first round, receiving 55.67% of the vote, and held the post of president for a year temporarily due to the controversies and started his duties officially in February 2017.

Consequently, whereas Moise claimed his tenure was supposed to end in February 2022, opposition parties argued that he should have left office in February this year.

Haiti has endured decades of political upheaval, poverty and a devastating earthquake in 2010 and remains highly vulnerable to natural hazards — mainly hurricanes, floods and earthquakes.

The tiny Caribbean island of nearly 12 million people has been hit hard by an economic crisis exacerbated by the coronavirus outbreak as the country is one of the poorest nations in the Western Hemisphere.

During Moise’s presidency, the daily income of nearly 60% of the population fell below $2.

Tensions began rising due to the economic and political crises as well as the security and health problems escalated by the COVID-19 pandemic.

The opposition in Haiti accused Moise of attempting to consolidate his power by restricting the powers of the courts overseeing the actions of the government and by establishing an intelligence agency acting under him.

Moise was assassinated at his residence by unidentified gunmen.

First lady Martine Moise was wounded in the incident, which occurred around 1 a.m. local time (0500GMT), and later taken to a hospital for treatment.

'Turkish Cypriot cause is Turkiye's cause': Turkish parliament speaker