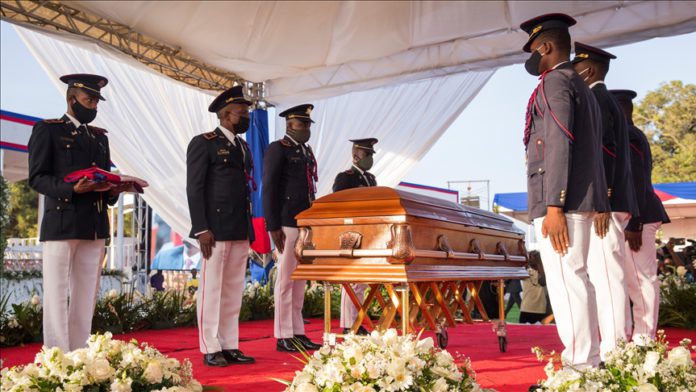 Protesters clashed with police and shots were fired as tear gas drifted to the site of the private funeral. Demonstrators accused those present of killing the president.

Former first lady Martine Moise, who was seriously wounded in the attack that killed the president, arrived with her three children and demanded justice, saying that her husband was “betrayed.”

“They’re watching us, waiting for us to be afraid,” she said. “We don’t want vengeance or violence. We are not going to be scared.” ​​

“It’s a goodbye but not a farewell. I did not think that this change you wanted to make could lead to your assassination. The oligarchs have won a battle. We have lost a battle, but the war is not over yet,” she added.

Government officials, newly installed Prime Minister Ariel Henry and dignitaries, including a US delegation, were present at the ceremony. The US and UN delegations left minutes after arriving because of violence.

“The presidential delegation is safe and accounted for in light of the reported shootings outside of the funeral,” White House spokeswoman Jen Psaki told reporters. “They are on their way back to the United States.”

“We urge everyone to express themselves peacefully and refrain from violence,” US Ambassador to the UN Linda Thomas-Greenfield tweeted.

The funeral was held amid political turmoil. One day before his death, Moise appointed Henry but he was not sworn in. After the assassination, interim Prime Minister Claude Joseph took control of the country unleashing a crisis for the political class. Days later, Joseph handed power to Henry, who promised to form a provisional consensus government until elections are held.

Moise, 53, was assassinated July 7 by armed commandos at his home in Port-au-Prince.

Authorities confirmed 26 suspects have been arrested, including three police officers and 18 former Colombian soldiers involved in the assassination.