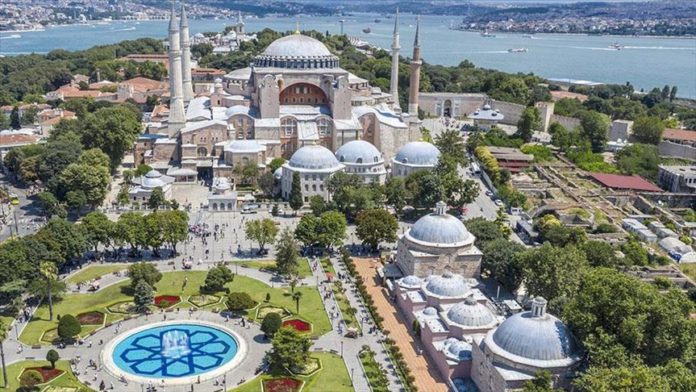 The Hagia Sophia and Chora mosques in Istanbul are the property of Turkey, meticulously protected with their “historical, cultural, and spiritual value,” the country’s Foreign Ministry said on Saturday.

The two historical landmarks in the Turkish metropolis were reconverted last year into mosques after a decision that Foreign Ministry spokesman Tanju Bilgic underlined in a written statement was the result of a legal process that followed a ruling by the country’s Council of State.

“The Hagia Sophia and the Chora are the properties of the Republic of Turkey that are meticulously conserved in terms of historical, cultural and spiritual value,” said Bilgic’s statement, responding to a question on the decision adopted on the “Historic Sites of Istanbul” at the 44th Extended Session of the (UNESCO) World Heritage Committee.

It noted that from the outset of this process, Turkey has been in “open and uninterrupted communication and cooperation with UNESCO World Heritage Center,” and underlined that two visits by the UNESCO Advisory Mission to Istanbul upon Turkey’s invitation “clearly manifest our constructive and transparent approach which is also reflected in the Advisory Mission reports.”

Bilgic said that the ongoing restoration work in both monuments had no negative impact according to UNESCO standards. He added: “On the contrary they aim at protecting the authenticity and the integrity of the property as corroborated by the UNESCO missions of 2019, 2020 and 2021.”

“We are astonished by the decision adopted during the Extended 44th Session of the World Heritage Committee, where Turkey is currently an observer State Party, which includes expressions that contradict with the Advisory Mission reports and the factual situation in these monuments,” said the official.

“Turkey disassociates itself from the relevant articles of the decision on the “Historic Areas of Istanbul” based on biased, unfair wording prepared with political intentions, which is incompatible with the implementations, the factual situation and the Advisory Mission reports.”

Bilgic went on to say that Turkey will “continue its diligent and rigorous efforts” to preserve its sites within the framework of its commitments to the 1972 World Heritage Convention as a State Party since 1983, fully aware of its rights, prerogatives and responsibilities towards its properties on UNESCO World Heritage List.

Besides being a mosque, the Hagia Sophia is also among Turkey’s top tourism destinations and remains open for domestic and foreign visitors.