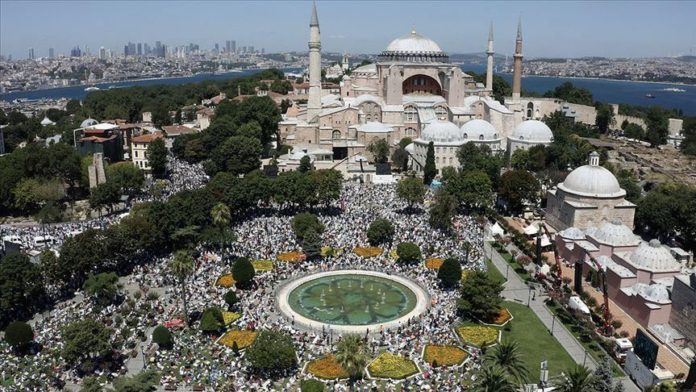 If the Turks had not protected Hagia Sofia, it would have fallen a long time ago, a Greek Orthodox priest said.

Evangelos Papanikolaou, the priest at Analipseos Church in Rafina near Athens, said in a speech that Turks protected many churches in Greece and did not close them.

“Who would protect a massive building like Hagia Sofia? Turks did,” he said, adding that Turks never shut any churches in Crete but many monasteries and churches were closed down in Greece on the orders of Otto I,” he said, referring to a Catholic Bavarian prince who was declared the king of Greece in 1832.

Othonas refused to adopt Orthodoxy and remained as a heretic in the eyes of Greek population.

Papanikolaou said people were able to practice their religion under the Turkish rule in Greece.

“That’s why [Byzantine] people had said ‘I’d rather see Turkish turban than Latin mitre’. I would wish to see none of those two but if I have to make a decision, I would prefer the Turks,” he said.

The famous phrase “I would rather see a Turkish turban in the midst of the City (i.e., Constantinople) than the Latin mitre” reflects the suffering of Orthodox Christians in the hands of Catholics following the Great Schism of Christianity on July 16, 1054.

Papanikolaou went on to say that many tourists visited Hagia Sofia in improper clothes while it was a museum but from now on they will take off their shoes and wear long dresses and headscarves in accordance with the attire rules in a place of worship.

“Isn’t it a sign of respect?,” he asked rhetorically.

“Maybe we need to take this not as a damnation but a correction,” he said referring to Turkey’s restoring of Hagia Sophia’s status as a mosque.

Some 350,000 Muslims took part in Friday prayers both inside and outside the historic mosque in Istanbul, Turkey’s largest metropolis.