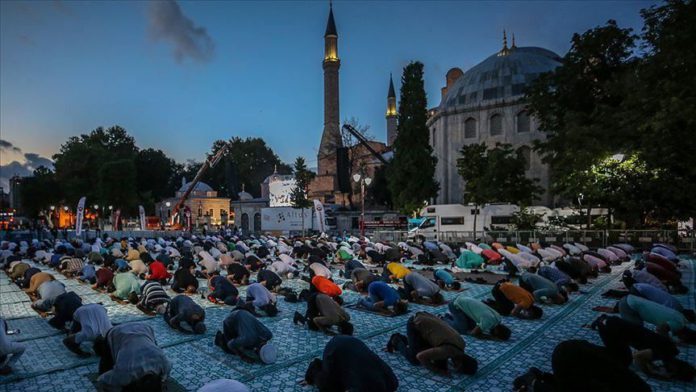 The move to re-open the Hagia Sophia as mosque is “historically and factually justified,” a Malaysian group said Tuesday.

In a statement, the Movement for an Informed Society Malaysia or WADAH said it “celebrates the return and opening of Hagia Sophia as a Masjid [mosque].”

In an online statement, WADAH President Ahmad Azam Ab Rahman said that even with the opening of the mosque, both Christian and Islamic symbols would continue to be preserved.

Rahman pointed out that the Turkish government used curtains and folding screens to cover the Hagia Sophia’s many Christian mosaics, icons, motifs and symbols during Muslim prayers, and that these would not be removed or permanently covered up.

“We commend and laud President Recep Tayyip Erdogan for his leadership, his audacity and courage heralding long awaited inspiration for the Muslim world,” said Rahman.

Separately, a Muslim clerical body in Indonesia’s northernmost province of Aceh also hailed the opening of the Hagia Sophia Mosque.

Tengku Bulqaini Tanjungan, the vice-chairman of Ulema Consultative Assembly, on Monday said Turkey, under the leadership of President Erdogan, has shown its concern for the Islamic world, helping the weak in various parts of the world.

“Then, there is no reason not to support him on the Hagia Sophia move,” he told Anadolu Agency.

Highlighting that the Istanbul landmark had been a mosque for centuries before being turned into a museum, Tanjungan said his group welcomed Turkey’s decision.

Tanjungan said the decision could be seen as an effort to boost Muslims’ international prestige.

“Muslims in Turkey were able to get rid of foreign intervention that has been shackling the determination of Muslims to rise.”

Teuku Zulkhairi, an academic at the State Islamic University of Ar-Raniry, said Turkey was now slowly recovering from a long downturn.

“Now, Turkey is an important country and cannot be ordered by other states, especially in the case of the Hagia Sophia,” Zulkhairi told Anadolu Agency.

He said the rage displayed by Greece against Turkey over the decision showcased a very intolerant way of thinking in the West.

“Greece and other Western countries have questioned Turkey for turning the Hagia Sophia back into a mosque, but at the same time, they had turned hundreds of Ottoman heritage mosques into churches,” he added.