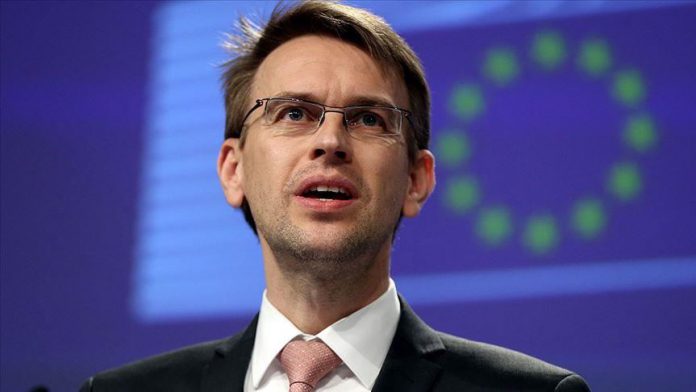 Warlord Khalifa Haftar’s unilateral declaration of becoming the ruler of Libya is unacceptable and will never provide a sustainable solution for the country, a spokesman for the EU’s foreign policy said on Tuesday.

“Any attempt to push forward a unilateral solution, even more by force, will never provide a sustainable solution for the country. Such attempts can’t be accepted”, Peter Stano said.

In a video message on Monday, the warlord, whose forces are fighting the UN-recognized government in Tripoli, said he “accepted the popular mandate” to govern the country, using as a pretext street demonstrations in the areas under his control.

Stano pointed out that Skhirat agreement signed under UN auspices “remains the viable framework for a political solution in Libya until amendments or replacements are found.”

Signed in 2015 in Morocco, the agreement set up the Government of National Accord (GNA) to manage the transition process in Libya.

Stano also reiterated the previous EU calls for an inclusive Libyan-led peace process to find a political solution with the participation of all parties involved in the conflict and the help of the international community.

Since the ouster of late leader Muammar Gaddafi in 2011, two seats of power have emerged in Libya. The UN-recognized GNA led by Prime Minister Fayez Al-Sarraj has authority over the Western part of the country, including the capital Tripoli. The Eastern side is controlled by Haftar, who enjoys the support of Egypt and the UAE.

Haftar’s militia has been intensively attacking the capital for a year.