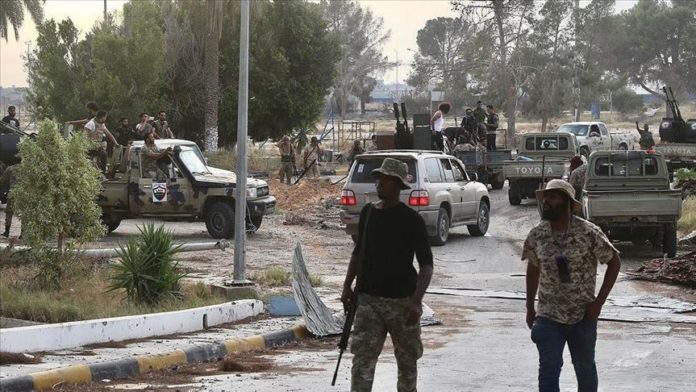 The course of the operation launched on Feb. 4, 2019, towards the capital Tripoli by groups led by putschist general Khalifa Haftar was radically changed starting in February 2020. Groups under the Government of National Accord (GNA), which had previously halted Haftar’s expansionism, have made rapid progress on the front lines since then. In April in particular, towns to the west of the capital such as Sabrata, Surman, Aceylat and Zilten were cleared of Haftar’s militias and the strategic al-Watiya military airbase in the area was surrounded. In May, as a result of ongoing intense fighting in the region, the base was captured by GNA troops. These gains not only made the west of the capital secure but also led to the start of the withdrawal of troops loyal to Haftar from the line of fighting and especially from the fronts to the south of the capital. As of June 4, the entire city of Tripoli was secured by capturing areas within Haftar’s offensive range.

This success, achieved by the GNA troops in as short as two months, has led to a growing outpouring of views that the Libyan crisis can be resolved by diplomacy — that is, by peaceful means — rather than by war. This view is based on the “hurting stalemate,” argument of Prof. William Zartman, which is very often cited in conflict resolution. According to this approach, parties clash until it is understood that conflict will not produce results and this stalemate pushes them to an agreement. Of course, no conflict lasts forever. On the other hand, diplomatic initiatives that ignore the dynamics of the conflict open the door to new disputes rather than ensuring lasting peace and stability. At this point, some questions that need to be answered in the Libyan crisis are: What does it mean to talk about peace and stability in failed states like Libya? Do the necessary conditions for a peaceful resolution of the Libyan crisis exist?

There are many different ways in which a state can fail, such as by its inability to improve the well-being of the society, to protect borders against external dangers and represent the majority of the public. But apart from all these, the most important factor that makes a state lose its modern aspect and turns it into a failed state is the loss of its monopoly to use force in all or part of the territory officially under its control. This means that more than one power dominates a certain geographical region and builds its own sense of governance, its own bureaucracy and institutions, thereby drawing imaginary boundaries between itself and others. These imaginary borders, parallel institutions and economic resources under their control lead to a competition between actors. The June 2014 elections in Libya, for example, resulted in the formation of two separate parliaments and governments and the establishment of the GNA as a third political center in accordance with the Libyan Political Agreement signed in Suheyrat, Morocco in December 2015, resulting in prolonged conflicts between local actors. The multi-actor structure in the field — that is, the presence of more than one power — hinders the functionality of existing institutions and underlines the alternatives for resolution offered for the crisis areas. As a result, peace and stability in failed states in general and in Libya in particular, as in other modern states, are conditional on the highest authority establishing a monopoly on the use of force within certain provision to ensure the functioning of institutions, the distribution of resources and the security of its citizens.

It may be thought that the establishment of such an authority can be accomplished by the integration of armed groups into security forces. Integration as a relatively peaceful method did not produce positive results, as seen in its application between 2011 and 2014. After the revolution, armed groups resisted the integration process by refusing to give up their autonomous structures but tended to build military and economic capacity through the institutions created in this context. Given that integration is not a good alternative to creating a supreme authority that will establish peace and stability, we see this as the only option to achieve a focus of power that can dominate other groups. Whether there is a power focus to establish peace and stability in Libya can be evaluated on two different aspects of the crisis. The first is the international dimension of the crisis. An agreement between the international actors involved in the war in Libya and an international intervention force to be established under this agreement with a goal independent of the interests of local groups could end the security dilemmas between local actors. In this way, it can take on a supervisory role for the groups’ disarmament and the construction of the modern state institutions in many areas from economy to security. But for that to happen, conflicts of interest between the international actors need to be replaced by compliance.

Looking at the current situation in the international arena, it is not possible to establish such cooperation. The United Arab Emirates (UAE), France and Egypt, for instance, have openly expressed their support for the peaceful resolution of the crisis but are deeply disturbed by the engagement of Turkey in Libya and are in favor of continuing the fight against “radical” elements, referring to the GNA’s troops. In parallel with this rhetoric, they continue to contribute to the military capacity of Haftar. Russia, on the other hand, has a similar attitude. Moscow, which has held talks with representatives of the GNA on the one hand and declared that it favors the creation of a permanent ceasefire, and the deployment of planes to the airbase in Cufra on the other hand demonstrates its belief in the resolution of the crisis by military means. It will not be enough for one of these actors to radically change its current position and take an approach that looks after the interests of Turkey.

One of the main factors that gives local actors a reasonable option is the wide range of maneuvers allowed by the differences of opinion in the international arena. So while a situation where Russia or other states remain out of the equation would weaken Haftar’s military capability relatively, it cannot be expected to grow to a size that cannot be substituted by the asymmetric alliances Haftar has formed with other actors. Therefore, a partial or drastic change in the current approach of one of the international actors supporting Haftar will not be enough for international cohesion. Another alternative to establish peace and stability in an environment where there is international competition is possible through a radical change in the local dimension of the crisis. This means that one of the local armed groups has become a monopoly on using force by eliminating the others. In this case, a governance structure and institutions will be built to reflect the interests of the winning party. However, given the process of forming existing alliances in the field and the course of conflicts, a power distribution where a single local actor dominates the others is not possible right at the moment. Although the GNA-led alliance has gained the upper hand against Haftar in the West over the past few months, it is important to note that it is mainly composed of the groups competing against each other and coming together in the face of a common threat. It remains largely unclear how these groups will behave when the common threat is eliminated and whether the current cooperation can be maintained. Examples of the competition and cooperation in the west of the post-revolution country illustrate the fact that fragile alliances are an important part of the power struggle in Libya. On the other hand, it is hard to say that the offensive alliance led by Haftar has yet to collapse. Therefore, it can be said that the civil war has maintained a roughly equal multi-actor structure and that it is not possible to talk about the existence of a power focus that would establish stability in this situation.

As a result, the establishment of lasting peace and stability in a failed state-status geography such as Libya can be made possible by the presence of an authority capable of ensuring the security of its borders, institutions and citizens. In the current situation, it is difficult to say that there is an international and local conjuncture that would allow such an authority to be established. Under these circumstances, deploying diplomatic channels and sitting at the table can only produce a brief period of stability, such as a ceasefire. On the other hand, there can be no solution to protecting local actors who see the competition as a zero-sum game from the structural pressures caused by anarchy in the country. Rather than laying the groundwork for lasting stability, short-term ceasefires allow the losing side to recover and attack again. It should be read in this context that Haftar, who has previously heeded the calls for a ceasefire, has raised the issue of a ceasefire in the recent months. Furthermore, unless the structural problems are addressed, these initiatives will be a continuation of the artificial peace and stability environment created by the elections in 2012 and 2014 and by the political agreement in 2015.

*Translated by Merve Dastan in Ankara