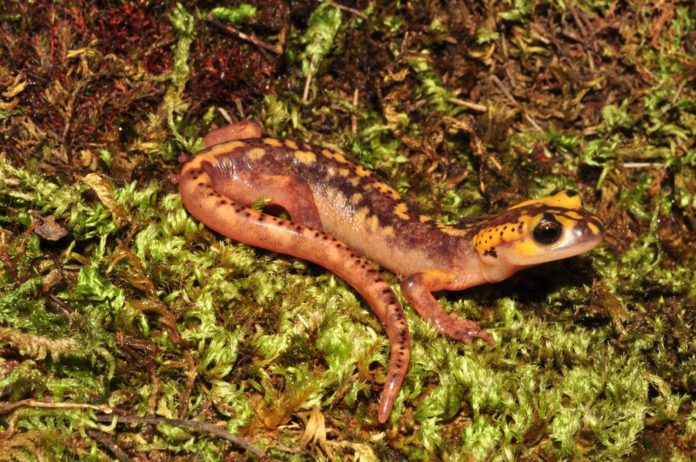 Turkey’s rare and endangered Anatolia Lycian salamander is under threat from serious habitat loss caused by various factors, including the opening of new stone and marble quarries, according to an expert.

Thanks to climatic and geographical conditions, the fauna of Turkey is abundant and extremely varied and includes many rare and endemic species.

But in Turkey, as in other parts of the world, such species struggle to survive under various threats such as climate change, habitat loss and human-wildlife conflict.

Speaking to Anadolu Agency, Mert Karis, an expert on herpetology, the branch of zoology concerned with reptiles and amphibians, said the first member of the species was detected by Austrian herpetologist Josef Eiselt in 1966 in Gedeller village, Konyaalti district in the city of Antalya, although the species was not known by its Latin name Lyciasalamandra antalyana at the time.

“In 1976, this population was named Lyciasalamandra antalyana by Muhtar Basoglu, who was a pioneer in herpetology, and his assistant Ibrahim Baran,” he said, adding the species can be found in forests with karstic limestones and glade as a dispersed population in an area from Antalya’s Hisarcandir village to Kocaaliler village in Burdur province.

He said populations of the species distributed in the Gulluk mountains and north of the mountains were designated as a different subspecies, Lyciasalamandra antalyana gocmeni, which is named after Bayram Gocmen, a renowned Turkish zoologist who passed away last year.

Touching on the nature of the unique species, which can be easily distinguished by its intense yellow color and pattern on its head and body, Karis said the Antalya salamander is a slow-moving species and its maximum adult length is only 14-15 centimeters.

Karis went on to say that unlike most oviparous (egg-laying) frog species, they are viviparous, bringing forth live young that develop inside the body like other Lycian salamanders, which is a rare feature.

Salamanders become active with the onset of the rainy season and the increase of humidity after spending the hot summer months in rocky areas and a few meters deep in the ground, he added.

However, he stressed that the endemic salamander is under a huge threat from habitat loss caused by several human-induced activities including climate change.

– Cause of habitat loss

Habitat destruction can be triggered in a number of ways, including “narrowing the habitats of the species by opening natural areas to settlement and agriculture, the opening of new stone and marble quarries and their uncontrolled activities, and logging caused by forest management plans without considering the endemic species living in the region,” Karis said.

Climate change and other related environmental factors also negatively affect the salamander populations, as these two have never had a positive impact on rare and endemic populations, he highlighted.

Explaining this, he gave an example of the warming effect on salamander species due to global climate change. He said that due to the high temperatures, moist habitats would no longer be as cool and humid as the species prefer, which would lead to two scenarios for the species.

“One of the two most basic scenarios that can arise in such a situation is trying to migrate to cool and humid habitats. This journey is unlikely for slow-moving species like the Antalya salamander. Another scenario is to survive by trying to adapt to changing climatic conditions or, unfortunately, their extinction if they cannot adapt,” he added.

He stressed that Turkey zoogeographically is situated in a very important location and is home to many endemic species thanks to its numerous natural isolation mechanisms and refuge areas.

However, there is a need for further protection plans regarding the current situation of the species and further efforts to identify populations by identifying potential distribution areas of the species, he said.

“The activities of the stone and marble quarries in the region should be brought under control, and detailed examinations should be carried out when licensing new quarries,” he said.

He went on to say that appropriate public spots regarding the species should be prepared and published widely. People should also be informed about the species.

“In light of the work to be carried out in this context, it will be possible to protect this endemic species living in a very narrow area only in our country and to leave it to future generations.”