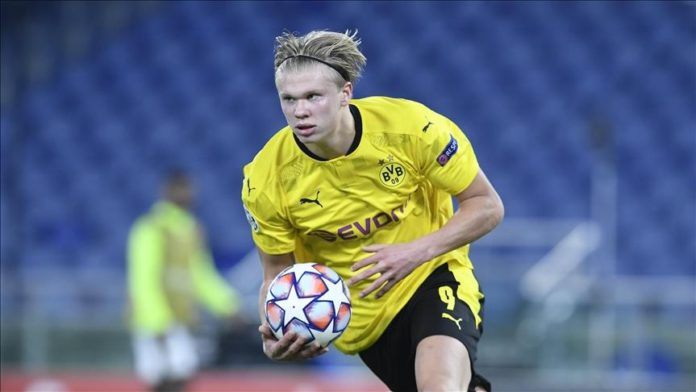 Borussia Dortmund’s Norwegian star Erling Haaland carried his team to the UEFA Champions League quarterfinals, scoring a brace in a match Tuesday against Sevilla that ended 2-2.

Germany’s Dortmund proceeded to the next stage in the Champions League despite the draw in the Round of 16 second leg at Signal Iduna Park.

Dortmund won 5-4 on aggregate as the club previously beat Sevilla 3-2 in the first leg at Ramon Sanchez-Pizjuan Stadium in Seville.

On Tuesday, Haaland scored the opener in the first half and doubled the gap with a penalty kick in the 54th minute in Germany.

After Haaland’s double, visitors Sevilla leveled the match as the Spanish team’s forward Youssef En-Nesyri scored two goals, including an injury time header, which made the result 2-2.

The Champions League said on Twitter that Dortmund star Haaland, 20, has become the youngest player to score 20 goals in the tournament’s history.

Haaland was named the player of the match.

“It was a hard game – I’m tired now, but to be in the next round feels very big,” the Norwegian forward said.

Portuguese club Porto fought hard against Italian powerhouse Juventus to qualify for the quarterfinals in the Champions League.

On Tuesday, Juventus won the second leg 3-2 against a 10-man Porto in Turin, but Porto marched to the next stage, winning 4-4 on aggregate thanks to the away goals rule.

Porto midfielder Sergio Oliveira scored the opener in the 19th minute from the penalty spot as the visiting team led the first half 1-0.

But Juventus came back in the second half. Italian forward Federico Chiesa’s double made it 2-1 for the home team.

Porto were down to 10 players as Iranian forward Mehdi Taremi was sent off in the early minutes of the second half.

Juventus leveled the tie as regular time in Italy ended 2-1.

Porto had won the first leg 2-1 on their home ground, Dragao Stadium.

In extra time, Oliveira’s goal for Porto gave a big advantage to the visitors because after this goal, Juventus were in need of at least two goals to be in the next stage.

In the 117th minute, French midfielder Adrien Rabiot scored with a header to make it 3-2 for Juventus.

Rabiot’s goal encouraged Juventus, but in the remaining time, Porto defended their goal well to enter the quarterfinals.

Juventus have been eliminated from the Champions League.

Porto’s Oliveira was named the man of the match.

“It is a unique feeling, to score two goals here. We are very with for our qualification. We clearly deserved it,” Oliveira said after the match.

The draw for the Champions League quarterfinals will be held on March 19.