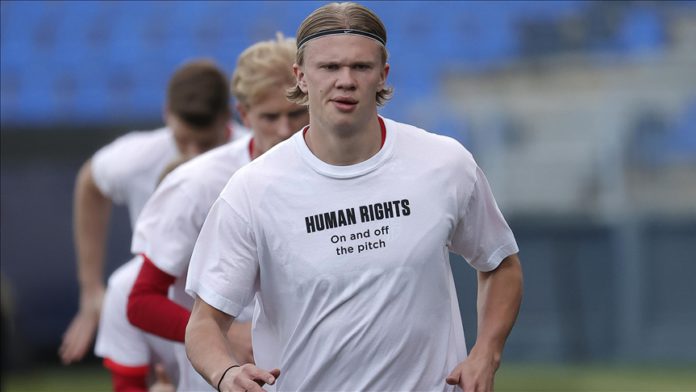 Norwegian star Erling Haaland on Saturday said goodbye to Borussia Dortmund as he played his final match for the German football club.

Haaland, 21, who has been a Dortmund regular since 2020, scored for BVB for the last time as Dortmund beat Hertha Berlin 2-1 at the Signal Iduna Park.

Dortmund waited for the equalizer for 50 minutes as Haaland scored from the penalty spot after Hertha Berlin’s Marvin Plattenhardt had handballed.
Haaland scored his 86th goal for Dortmund in 89 appearances.

Earlier this week, Manchester City reached “an agreement in principle” with Borussia Dortmund for the transfer of Haaland, the English club confirmed.

The Norwegian international is expected to join Man City on July 1 after the terms of the deal are finalized.

Before the Hertha Berlin match, Haaland was handed a bunch of flowers as Dortmund thanked him for his service. Meanwhile, the crowd at the Signal Iduna Park cheered for him, and his teammates applauded to honor the Norwegian star as well.

Youssoufa Moukoko scored the winner for Dortmund in the 84th minute as the home team sealed a 2-1 win to conclude the 2021-22 Bundesliga season in the second spot.

Bayern Munich, who took 77 points, have already won the 2022 Bundesliga title. Both clubs will play in the UEFA Champions League next season.

Hertha Berlin had 33 points to end the league in the 16th position as they will play relegation playoffs after Stuttgart beat Koln 2-1 thanks to a late winner.

The crucial header scored by Japanese defensive midfielder Wataru Endo has kept Stuttgart in the Bundesliga next season.

Stuttgart completed the league in the 15th position. They have 33 points but survived on goal difference.

On Saturday, the German champions Bayern Munich visited Wolfsburg to take a 2-2 draw.

In addition, he is Bundesliga’s top scorer for the fifth consecutive season.