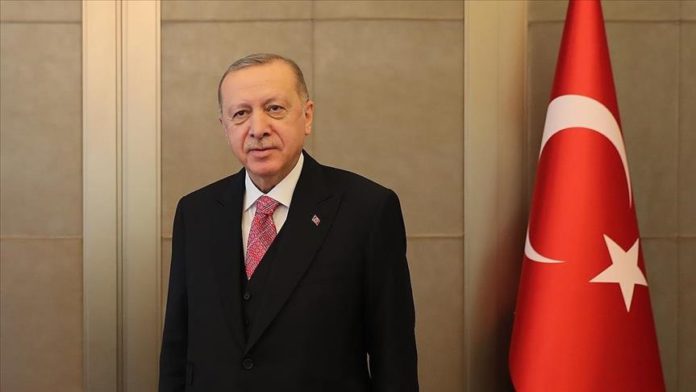 The Turkish president on Sunday said that the Western countries do not want to acknowledge the reality of Turkish diaspora getting stronger.

Recep Tayyip Erdogan said they never doubted that Turks and Muslims would take a much more visible place in tomorrow’s Europe in the way they deserve.

“Of course, this situation instills hope in us, but becomes a nightmare for others. The ones, who still try to squeeze European Turks into the narrow patterns of the 1960s, do not want to accept the reality of a growing and strengthening diaspora,” Erdogan told the International Union of Democrats (IDU) women’s and youth wings at the Dolmabahce Office in Istanbul.

Islamophobia and xenophobia, which have reached dire levels recently, are just one of the manifestations of this indigestion, Erdogan added.

“Islamophobia has become one of the most important tools for Western politicians to cover up their failures,” he said, adding that now media outlets, academics, authors, ministers have also begun resorting to this “populist method”, which was used by marginalized groups in the past.

Not only Turks but also other segments of society with different ethnic identities, appearances and religious affiliations suffer from the racist wave, he stressed.

“Even if the statistics are only the tip of the iceberg, it clearly shows the rising cultural racism in Europe. Hate crimes have doubled in the last year compared to the previous years,” he said, adding that the number of attacks against immigrants exceeds 3,000 in three European countries where most Turkish expats live.

More than 900 racist attacks were recorded in Germany alone, including 400 against Turkish people, he said.

Despite the coronavirus restrictions imposed last year, 121 different acts against mosques and mosque associations were reported, he added.

Underlining that the rights of Muslim women are being usurped both in public and private spheres in Europe, he said many European countries limited employment, social life and educational opportunities to the women who wear headscarves.

During the coronavirus pandemic, Erdogan said Turkey has so far sent aid to 157 countries and 12 international organizations.

“We have repatriated over 100,000 Turkish expats from 142 countries since the beginning of the pandemic,” he said.

“I hope we will overcome this disease together” by following COVID-19 protocols, he said.

Since December 2019, the pandemic has claimed over 2.92 million lives in 192 countries and regions.

Nearly 135.5 million cases have been reported worldwide, with recoveries at more than 77 million, according to figures compiled by the US’ Johns Hopkins University.