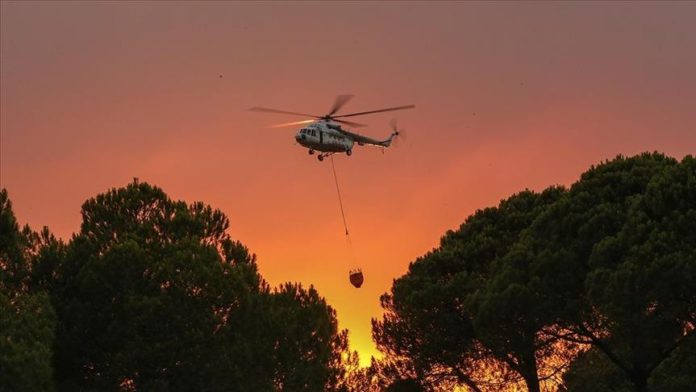 Turkish authorities continue the efforts to contain forest fires in the Manavgat and Akseki districts of the southern Antalya province, with aerial and ground operations underway.

Fires in Manavgat had first emerged on Wednesday at four different points around noon, whereas the fire in Akseki emerged late Friday.

The wind blowing hard at some locations has made it hard to put out the fires, while settlements are at risk.

The aerial elements have begun to operate once again in the early hours on Saturday.

Locals, in addition to the professionals, also contribute to the efforts to take the fires under control.

Volkan Hulur, the governor of Akseki district, said a great deal of effort was put to prevent fires from spreading to settlement areas.

Hulur went on to say that 60 houses out of a total of 71 were burnt to the ground in the Kepezbeleni neighborhood and the fire was going in the direction of forest area while both air and ground operations were underway.

“Weather conditions make it difficult to take the fire under control,” he said, adding that ground units were battling the fires tirelessly.

Since July 28, a total of 98 forest fires erupted in Turkey, with most of them being in southern regions, while the Turkish authorities managed to take 88 of them under control, but six people have so far lost their lives due to fires.

Turkish Agriculture and Forestry Minister Bekir Pakdemirli on Saturday said on Twitter the efforts were underway to take the remaining 10 forest fires under control.