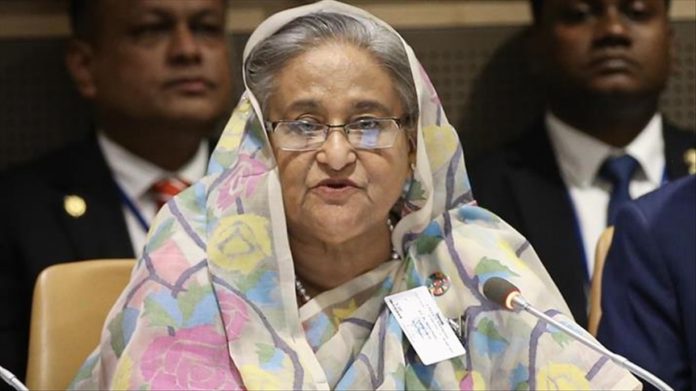 A congratulatory letter from Bangladeshi Prime Minister Sheikh Hasina on the occasion of Pakistan’s National Day is another sign of improvement in relations between the two countries, local experts said.

In a letter to her Pakistani counterpart Imran Khan on Tuesday, Hasina said her country is committed to “peaceful and cooperative” relations with Pakistan.

“I believe there are immense potentials for our existing relations to be further deepened and diversified in the coming years,” it said, adding: “Both of our peoples could benefit from the shared journey towards development and peace.”

“I wish you good health and happiness, and the continued progress and prosperity of the friendly people of Pakistan,” the letter concluded.

“Though it is a settled diplomatic norm to greet the neighboring or friendly countries on their national days, it still seems to me a good gesture,” Siddiqui, who served as Pakistan’s High Commissioner to Dhaka from September 2016 to February 2018, told Anadolu Agency, referring to otherwise years long-strained relations between the two countries.

Abdul Khalique Ali, a Karachi-based political analyst, views the development as another sign of improving ties between the two countries.

“No doubt, it’s a traditional message but [its] language is the real thing. The congratulatory message was also sent by the Indian premier but the language of the two messages is completely different,” Ali told Anadolu Agency.

He was referring to Indian Prime Minister Narendra Modi’s letter to Khan on the occasion of the National Day, in which he called for the creation of an “environment of trust, and devoid of terror and hostility” for improvement in ties between the two nuclear neighbors.

Since the independence of Bangladesh [then East Pakistan] from Pakistan in December 1971 following a nine-month bloody war, the relationship between the two South Asian Muslim states has passed critical courses with ups and downs.

In recent years, already icy relations between the two were fueled by the conviction of several Jamaat-e-Islami, and main opposition Bangladesh Nationalist Party leaders by a controversial local tribunal and subsequent executions on accusations of committing atrocities during the 1971 War of Independence.

Bilateral ties, however, have seemingly improved as Dhaka follows its constitutional “friendship to all and malice to none” diplomacy with Islamabad in recent months.

India helped the Bangladeshi militarily in the 1971 war, which resulted in a strong bond between Dhaka and New Delhi.

But ties between the two neighbors have reportedly been passing a bad patch due to frequent killings of Bangladeshi nationals at the hands of Indian border forces, diversion of upstream water of common rivers, and the recent enactment of a controversial Citizenship Amendment Act, which grants citizenship to “persecuted minorities” from Afghanistan, Pakistan and Bangladesh.