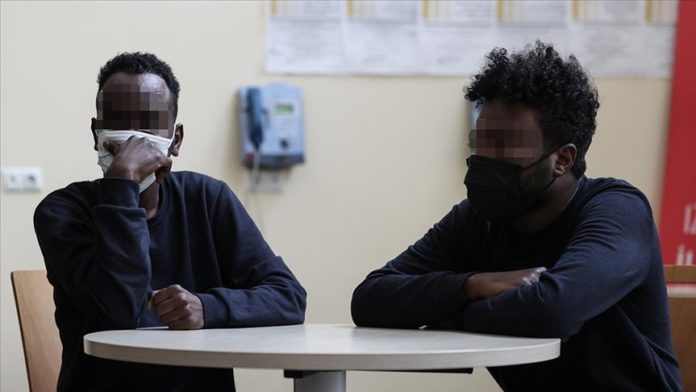 Weary of the civil war at home and with hopes for a better life, a Yemeni family attempted to cross to Europe through Greece. However, things did not go as planned.

One of them was lost at sea, after Greek coastguard units threw him into the cold and ruthless Mediterranean.

Three people of the family: a couple, Mahgdi Kalla and Fatima Mahmud, and their cousin, Mucahed Abduljavad, left Yemen in December 2021.

Using an illegal route, they arrived in Turkiye’s Aegean province of Izmir.

On Jan. 30, they got on board a rubber boat carrying a group of Yemeni asylum seekers and crossed to Greece’s Chios Island.

However, their happiness was short-lived.

The Greek coastguard caught them, put them on a boat, and then threw three people into Turkish territorial waters.

Kalla, Abduljavad and another Yemeni named Mahad Adinare were thrown into the sea.

Swimming against the strong currents and freezing temperatures, Kalla and Adinare managed to make it to the isle of Karaada off Mugla, Turkiye. But Abduljavad is still missing.

Turkish coastguard units gave the survivors first aid, and have launched a search operation for Abduljavad.

He said some of the asylum seekers were separated from the group and put on a boat while some others, including him, were taken to a police station wearing handcuffs.

He said they struggled for a long time as the sea was rough and cold. I thought this was the end, he said.

“The life jacket was too small and could not keep us afloat. We swallowed way too much water; therefore, my cousin was not able to swim. We made it to the island and waited until morning,” he said.

“Turkish Coast Guard teams rescued us the next day at 10 a.m. My cousin did not know how to swim at all and he was very scared. I can still hear his voice,” he said.

“It definitely was inhumane treatment. How could one throw a human being into the water? I will not try to cross to Greece again. We attempted to flee our country because of bad conditions and wars. We escaped one death and faced another one, we found nothing new,” he said.

Kalla said he was grateful to Turkish soldiers who assisted them at their time of need.

“They rescued us from the island … They gave us clothes and blankets. The Greek soldiers did not provide any food for us. The Turkish soldiers offered milk and food, they treated us well,” he said.

Earlier on Wednedsay, Turkish Interior Minister Suleyman Soylu said at least 12 irregular migrants pushed back by the Greek side were found frozen to death in northwestern Turkiye. They were stripped off their clothes and shoes.

Last week, Soylu said that three asylum seekers were thrown into the sea by the Greek coastguard, and two of them were rescued.