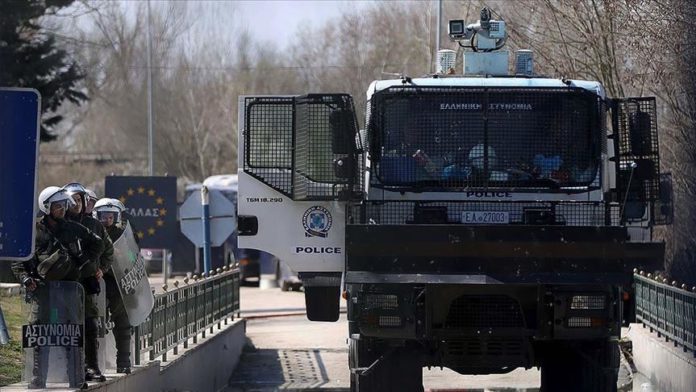 The Greek police have been bringing in asylum seekers living in the country and expelling them to Turkey by force while using the coronavirus pandemic as a cover for their abuses, according to a report published Wednesday.

The Wall Street Journal report, based on evidences from asylum seekers who faced violence as well as lawyers and human-rights activists, said “at least 250 asylum seekers have been forcibly expelled from Greece since late March.”

Simon Campbell, the field coordinator of Border Violence Monitoring Network, told the Wall Street Journal that he believes the real number is bigger than the cases reported and said “many migrants who are returned to Turkey don’t speak out.”

While the Greek authorities have denied reports of extrajudicial deportations, they failed to respond to the WSJ’s questions regarding the allegations by migrants and human rights groups.

Dimitris Koros, a lawyer with the Greek Council for Refugees, defined the Greek treatment against the asylum seekers as an “illegal pushback” and not “a deportation”.

“It’s illegal according to the Geneva convention and Greek law,” Koros said.

With efforts to continue on legal ground, Koros and his group compiled testimonies from at least 10 migrants with Afghan, Pakistani, North African, Syrian and Iraqi nationalities, who recently faced forced deportation from deep inside Greece.

Underscoring that the “Greek police are targeting migrants and refugees who haven’t officially filed an asylum claim,” Koros said even without the official file, the Greek law allows the asylum seekers to stay in the country for 30 days if they express an intention to apply for asylum and cannot be deported without due process.

According to the Wall Street Journal, the migrants’ testimonies compiled by the Greek Council for Refugees said additionally that “taking people from refugee camps, the Greek police have also deported migrants from a closed detention center, promising them freedom but instead driving them to the Turkish border.”

Pandemic used as cover for abuses

Koros told the US daily that the ongoing coronavirus pandemic paves the way for Greek police to abuse asylum seekers.

Besides Koros, Nadia Hardman, a researcher with Human Rights Watch (HRW), also told the WSJ: “Under the cover of a global pandemic it is obviously easier to get away with particular human rights abuses when the attention of the world is elsewhere.”

The HRW report published in March pointed out Greek authorities’ violent acts against the asylum seekers trying to cross the border, “including assaulting them, taking personal property and stripping them to their underwear before sending them back into Turkey.”

Though the Greek government refused to comment on the rights group’s report, it further noted that the Greek security as well as unidentified armed men were carrying out the illegal pushbacks via violent methods.

The HRW’s Hardman, who investigates and reports on human rights abuses, said in the report: “You just have a complete breakdown in the rule of law.”

One of the asylum seekers, Khalid Hassede, a 35-year-old Syrian, told the WSJ that he and his extended family “arrived by raft on the Greek island of Symi on March 21” and “were held by Greek police at the port for three days, rather than being taken to the island’s refugee camp.”

Hassede said his family along with at least 24 other Syrian asylum seekers were “told to board a Greek coast guard boat and informed that they would be taken to Athens to begin their asylum applications.”

“Instead, the boat took them back into Turkish waters, and they were forced to board an inflatable raft and left to drift in the sea. They were eventually rescued by Turkish coast guards and taken back to Turkey.”

Mohamad Ali Ahmadzi, a 20-year-old Afghan man who was also forcibly expelled, said “he saw Greek police give the smugglers cash to take 45 people across the river in two boats.”

Albani Mohmed, an asylum seeker from Morocco, told he was stopped by Greek police in Thessaloniki in April.

After stopped by the Greek police, Mohmed, 25, was taken to the police station “where he said he was beaten and had his cash and cellphone confiscated. Then he was put in a cell overnight with three Afghan migrants.”

According to the Wall Street Journal, Mohmed said: “They [the Greek police] threw us to Turkey without our clothes except for our underwear… They kept hitting us and told us never to return.”

Turkey has been one of the main routes for asylum seekers wanting to reach Europe, especially since the Syrian civil war started in 2011.

The country hosts nearly four million Syrian refugees, more than any other country in the world.