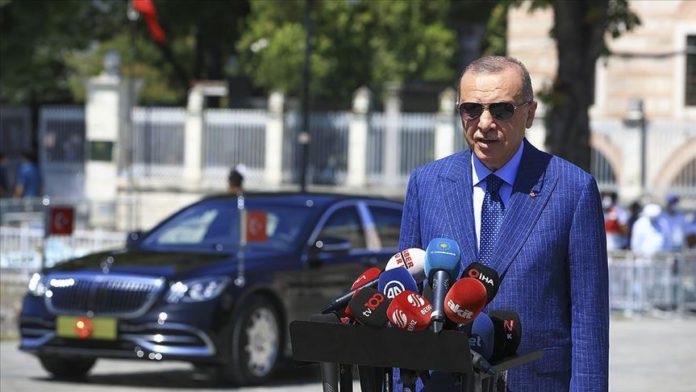 The “worthless” maritime deal just announced between Cairo and Athens has no effect on the issue of exclusive economic zones in the Eastern Mediterranean, Turkey’s president said Friday.

“The agreement between Greece and Egypt is worthless,” Recep Tayyip Erdogan told reporters in Istanbul after Friday prayer at the Hagia Sophia Mosque.

“There’s no need to talk with those who have no rights, especially in maritime jurisdictions,” Erdogan added.

Egypt on Thursday announced that it signed a bilateral agreement with Greece on the delimitation of maritime jurisdictions between the two countries in the Eastern Mediterranean.

The Turkish Foreign Ministry slammed the “so-called agreement” in a statement, asserting that Greece and Egypt share no mutual sea border and that the deal is “null and void” for Ankara.

It added that the demarcated area in the agreement was located on Turkey’s continental shelf, as Ankara has reported to the UN.

Turkey has long opposed the efforts of various countries to exclude it from its rightful maritime jurisdiction, despite it having the longest coastline in the Eastern Mediterranean.

The efforts have especially tried to deprive Turkey of its rights to explore for energy resources in the region, which Turkey has encouraged the fair sharing of by regional countries.

“This really was a huge disaster,” Erdogan said.

The death toll in the blast at the Port of Beirut stands at 154, with around 5,000 people injured, and massive material damage.

“We will stand by Beirut, Lebanon, and the Lebanese people with everything we can,” he added.

The Lebanese government has announced the formation of a commission to investigation the deadly blast.

The blast rocked Lebanon even as it also faces economic woes, including a dramatic drop in the value of the Lebanese pound against the US dollar.

Turning to the coronavirus pandemic, Erdogan stressed how Turkey has extended a helping hand to nearly 150 countries to fight the virus.

“We are currently sending everything from masks to overalls and medicines to nearly 150 countries amid the coronavirus pandemic,” Erdogan said.

Turkey on Thursday confirmed 220,546 recoveries, while the total number of cases in the country stands at 237,265.

The country’s death toll from the disease rose to 5,798.

The coronavirus pandemic has claimed over 715,500 lives in 188 countries and regions since it originated in China last December. The US, Brazil, India, and Russia are currently the worst-hit countries in the world.

Over 19.12 million COVID-19 cases have been reported worldwide, with recoveries topping 11.59 million, according to figures compiled by the US’ Johns Hopkins University.

New Zealand to reopen borders in phases starting this month