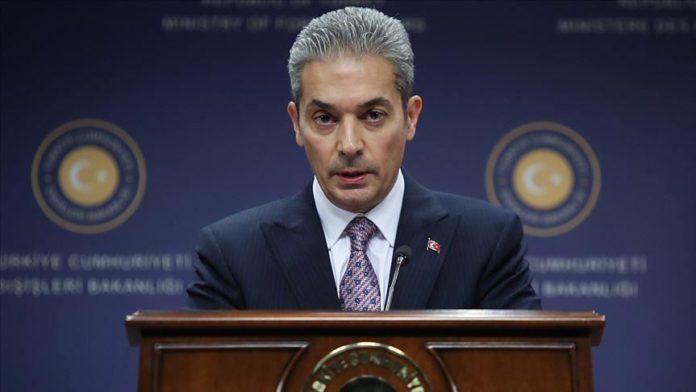 The Greek Cypriot administration’s refusal to accept political equality with the Turkish Republic of Northern Cyprus (TRNC) led to the failure of past negotiations seeking to resolve the dispute on the island, a Turkish official said Thursday.

In a statement, Turkish Foreign Ministry spokesman Hami Aksoy stressed that the underlying reason for the lack of success in previous talks was the Greek Cypriot side’s aversion to equally sharing power and natural resources on and around the island with the TRNC.

Aksoy was referring to a recent announcement by UN Secretary-General Antonio Guterres, who said talks between the three guarantor countries — Turkey, Greece and the UK — and the two sides on the islands, as well as the UN (5+UN) would restart after upcoming presidential elections in the TRNC.

This would not entail the launch automatically of a new negotiation process, nor the resumption of the Conference on Cyprus talks from where they left off in Crans Montana, Switzerland, in July 2017, said Aksoy.

He stressed that there was no common ground or vision for a resolution between the two sides on the island. “If a partnership is still desired on the island despite this fact, political equality, as a principle requirement, should be recognized in advance by the Greek Cypriot side with its entire elements, and a new negotiation process should be built on it,” he underlined.

“If this cannot be done, then the two sides should start a new negotiation process over a two state solution on the basis of sovereign equality.”

Aksoy noted that Ankara had sought to clarify these issues last year via unofficial 5+UN talks, adding that the country would not enter a new negotiation process on dubious grounds with tried-and-failed methods.

After the forcible division in 1963 of the island of Cyprus by the Greek Cypriots, Turkish Cypriots suffered under a campaign of ethnic violence.

In 1974, following a coup aimed at Cyprus’ annexation by Greece, Ankara had to intervene as a guarantor power. In 1983, the TRNC was founded.

In a recent report, Guterres said that “new ideas” may be needed for settling the issue of the island.