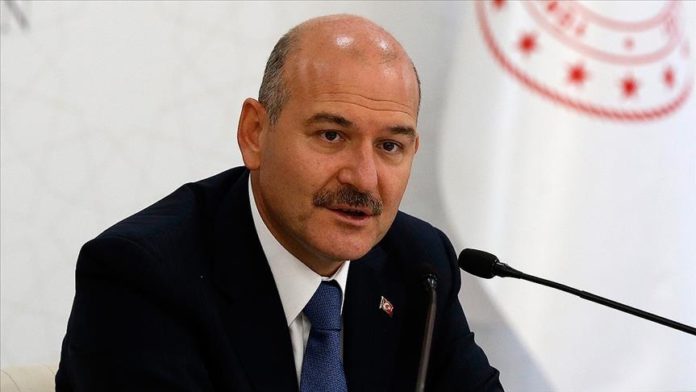 The Turkish interior minister on Saturday criticized the Greek Coast Guard units for their ill-treatment of irregular migrants attempting to cross into Europe.

“Your Coast Guard units are leveling up the torture and inhumane treatment everyday,” Soylu said, pointing to the footage in which some of the migrants were severely battered by the Greek authorities.

Soylu went on to say that Greek coast guard units were responsible for the “inhumane action” and pushbacks into the Turkish territorial sea and that the EU border agency Frontex was “complicit” for such acts, which were “ignored” by the EU.

Meanwhile, the Turkish Coast Guard Command issued a statement on a total of 28 migrants rescued on two separate occasions after they were pushed into the Turkish territorial waters.

According to the statement, 17 migrants, comprising women and children, were rescued on Dec. 6 from a half-sunken lifeboat after getting stuck on an island for two days.

The statement noted that the irregular migrants said they were stuck on the Bulamac Island — some 15 kilometers (9.3 miles) southwest of Didim in Turkey’s Aydin province — for 2 days. They were then captured on the island by Greek elements and taken on a Greek Coast Guard ship in two groups — with women and children separately from men. While men were hit and kept on the ship, women and children were left to the Turkish territorial waters on a lifeboat and dragged, added the statement.

The statement went on to say that 11 migrants, including men who were separated from women and children in the previous incident, were rescued on Dec. 8 after they were dragged into Turkish territorial waters by the Greek elements.

It added: “It was seen that they [men] were heavily battered and there were some scars on their bodies. It was also learnt by their statements that their money, mobile phones, and other valuable possessions were taken.”