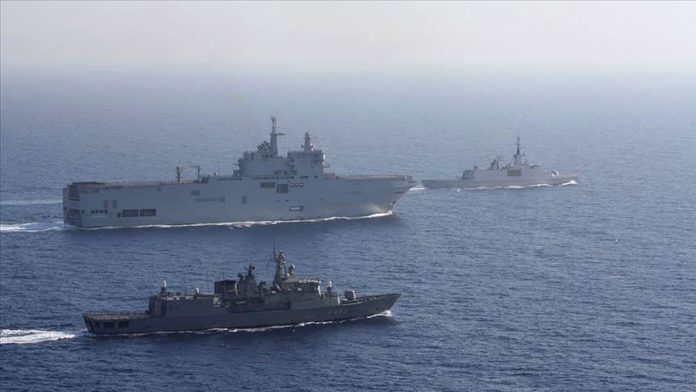 Greece’s argument seeking an exclusive economic zone (EEZ) for its islands dotting the Mediterranean, citing the 1982 UN Convention on the Law of the Sea (UNCLOS), has dangerous implications for the entire world.

According to UNCLOS, a sovereign state has special rights regarding the exploration and use of marine resources, including energy production from water and wind, up to 200 nautical miles from its coast. The convention stipulates, however, that states designate a principal island from which distance can be measured, not smaller islands. Further, overlapping claims, haphazard coasts, and various islands make it impossible to apply this general principle of an EEZ to the Mediterranean.

Three world powers – the US, UK and France – occupy 44 islands across the globe, from the remote waters of the Atlantic to the Pacific and the Indian Ocean. If Greece’s argument is accepted and the EEZ is measured from the island territories, many countries in the world will not be able to have any claim to the waters along their shores. Russia occupies four islands just outside the shores of Japan. An EEZ for these islands means that Japan will not even have jurisdiction along its shores.

During the 1919-1923 Turkish War of Independence, Greek occupation forces were defeated by Turkish National Forces, forcing them from the Anatolian peninsula.

At the end of the war, Turkey signed the 1923 Treaty of Lausanne with Greece and other major powers, including Britain, France and Italy, setting its western borders with Athens and partly addressing some of its eastern and southern border issues with Syria, then under a French mandate, and Iraq, which was under a British mandate.

Despite the peace treaty, some issues between Turkey and Greece went unaddressed, including the status of islands in the Aegean Sea, between the Greek and Anatolian peninsulas.

Aside from two islands, Gokceada and Bozcaada, close to the strategically critical Turkish strait of the Dardanelles – where the Ottoman Empire fought the legendary battle of Canakkale (Gallipoli) – all of the other Aegean islands were left to Greece.

Meis (Kastellorizo), a Greek island, lies just two kilometers (1.24 miles) off Turkey’s southern coast and 570 km (354 mi) from the Greek mainland. Interpreting the UNCLOS provision of having 200 nautical miles of EEZ from the shore of this island means Turkey would have no territorial waters, continental shelf, or other maritime rights in the region.

“No one can confine Turkey, which has the longest coastline in the Mediterranean, to the shores of [the Mediterranean city of] Antalya. We are determined to defend the maritime rights of our citizens and the people of the Turkish Republic of Northern Cyprus (TRNC),” Turkish President Recep Tayyip Erdogan said last week.

Sencer Imer, chief advisor of the Ankara Centre for Crises and Policy Research (ANKASAM), an Ankara-based think tank, said Greece is trying to take away Turkey’s rights in the Eastern Mediterranean.

“They [Greece and its allies] are both strategically trying to prevent our exit to the Mediterranean Sea and to confiscate the underground wealth. This is piracy, and Turkey is not able to accept it,” he said.

Emphasizing that these developments will create a situation against Greece in the long term, Imer said the UN and EU have no standing here, and Turkey has sovereign rights in terms of the Law of the Sea.

Besides Meis (Kastellorizo), there are other Greek islands also scattered all over the Aegean Sea towards the Turkish coast, like Lesbos, Chios, Kos, Rhodes, and Samos. Their existence blocks Turkey from extending any of its zones of influence beyond a few nautical miles off its coastline.

Turkey holds the view that islands cannot have a full EEZ of 200 nautical miles (nm). It believes that islands should be either granted a reduced area of 12 nm or none at all if they are part of a larger territory far from the mainland.

On Dec. 1, 2019, Turkey formally claimed that the Greek island of Meis (Kastellorizo) should not have any EEZ at all because it is a small island just off the Turkish mainland and cannot generate a maritime jurisdiction area 4,000 times larger than its surface.

According to Turkey’s Foreign Ministry, an EEZ has to be coextensive with the continental shelf, based on the relative lengths of adjacent coastlines.

If the UNCLOS formula of territorial waters is applied, 71.5% of the Aegean Sea would be under Greek sovereignty and a mere 8.7% under Turkish, thus severely restricting Turkey’s maritime territory.

Ankara insists that both sides should sit down for dialogue to reach a win-win solution based on fair sharing. Looking at the number of islands dotting the globe and retained by powers like the US, UK, and France, the Greek formula would block many countries from claiming EEZs along their shores.

Islands the US retains

Puerto Rico and the US Virgin Islands: Located in the northeast Caribbean Sea, approximately 1,600 km (994 mi) southeast of Miami, Florida.

Guam and the Northern Mariana Islands: They lie southeast of Japan in the Pacific Ocean, north of New Guinea and east of the Philippines, demarcating the Philippine Sea’s eastern limit.

American Samoa: The island is the southernmost reach of the US at 14 degrees below the equator.

Palmyra Atoll: Located south of the Hawaiian Islands, roughly one-third of the way between Hawaii and American Samoa.

Howland Island: The island lies between Hawaii and Australia.

Jarvis Island: Located in the Pacific Ocean, about halfway between Hawaii and the Cook Islands.

Johnston Atoll: Located in the North Pacific Ocean, about 750 nm southwest of the island of Hawaii.

Kingman Reef: In the North Pacific Ocean, it lies halfway between the Hawaiian Islands and American Samoa.

Midway Atoll: Equidistant between North America and Asia in the North Pacific.

Anguilla: British overseas territory in the Caribbean, lying east of Puerto Rico and the Virgin Islands and north of Saint Martin.

British Antarctic Territory: Sector of Antarctica claimed by the UK.

Cayman Islands: Located in the western Caribbean Sea south of Cuba and northeast of Honduras, between Jamaica and Mexico’s Yucatan Peninsula.

Diego Garcia: South of the equator in the central Indian Ocean.

Gibraltar: Located at the southern tip of the Iberian Peninsula. Bordered to the north by Spain.

Montserrat: The island is part of a chain in the Caribbean, in the West Indies.

Saint Helena, Ascension, and Tristan da Cunha: Located in the South Atlantic. In 2008, the UK applied to UNCLOS seeking EEZ beyond 200 nautical miles. But the UN body in 2010 said the limit cannot be extended beyond the standard limit, based on scientific surveys.

Tristan da Cunha: The most remote inhabited archipelago in the world, lying approximately 1,511 mi (2,432 km) off the coast of Cape Town, South Africa.

South Georgia and the South Sandwich Islands: In the southern Atlantic Ocean, the islands lie about 700 km (430 mi) southeast of South Georgia.

Sovereign Base Areas of Akrotiri and Dhekelia: British territory near the island of Cyprus. It serves as a base for signals intelligence and monitoring network in the Mediterranean.

Turks and Caicos Islands: Two groups of tropical islands in the Lucayan Archipelago of the Atlantic Ocean and northern West Indies.

Guernsey: North of Saint-Malo and to the west of Jersey and the Cotentin Peninsula.

Isle of Man: Situated in the Irish Sea between Great Britain and Ireland.

Jersey: Near the coast of Normandy, France. It is the second-closest of the Channel Islands to France, after Alderney.

Guadeloupe: Located north of Antigua and Barbuda with Dominica lying to the south.

Martinique: Located in the Lesser Antilles of the West Indies in the eastern Caribbean Sea.

French Guiana: It borders Brazil to the east and south and Suriname to the west.

Saint Pierre and Miquelon: Situated in the northwestern Atlantic Ocean near the Canadian province of Newfoundland and Labrador.

Collectivity of Saint Martin: Located in the West Indies in the Caribbean.

Saint Barthelemy: The island lies about 35 km (22 mi) south-east of Sint Maarten and north-east of Saint Kitts and Nevis.

Mayotte: Located in the northern Mozambique Channel in the Indian Ocean off the coast of Southeast Africa, between northwestern Madagascar and northeastern Mozambique.

Reunion: Situated in the Indian Ocean, east of Madagascar, and 175 km (109 mi) southwest of Mauritius.

Russia occupies four islands that separate the Sea of Okhotsk from the Pacific Ocean. They are claimed by Japan, which refers to them as its Northern Territories or Southern Chishima, and considers them part of the Nemuro Subprefecture of Hokkaido Prefecture. They lie just a few kilometers off the north coast of Hokkaido in Japan.