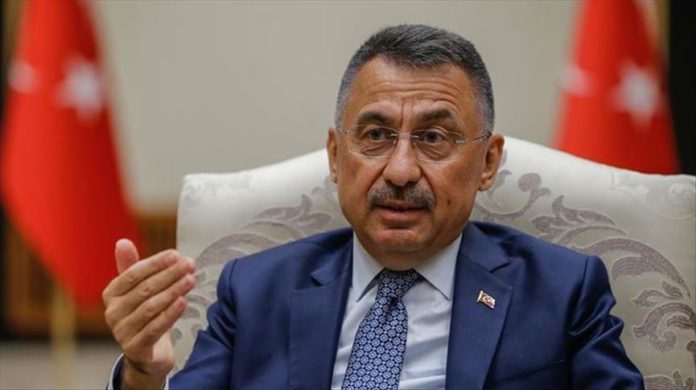 Arguments put forward by Greece and the Greek Cypriot are baseless according to international law, says Turkish vice president.

Mentioning the recent tensions in the Eastern Mediterranean, “Greece, Greek Cypriot administration and France, an imperialist country with no coast in the region, aims to utilize the European Union (EU) for their own agenda under the pretext of ‘solidarity of the Union,” Oktay remarked.

Oktay noted that the present state of affairs in Turkish, EU relations is affiliated with the fact that some member states using the bloc for their political interests and agenda, consequently stalling the relations between Turkey and the EU.

“Under these circumstances, the rational option for the EU is to assume the facilitator role by acting unbiased and just,” he added.

Addressing country’s efforts to stem the spread of virus, Turkish vice president argued that Turkey is among the countries that is least-affected from the novel pandemic due to its success in managing the crisis.

He said the country took necessary economic measures to minimize the negative effect of the pandemic on its citizens.

Regarding the ongoing border clashes between Armenia and Azerbaijan, Oktay reiterated that it is Armenia which triggered the hostilities by recently attacking Azerbaijan, hence showing once more that itself is the biggest obstacle before peace and stability in the region.

“Armenian’s constant provocations and attacks on Azerbaijani soil led Azerbaijan to execute the right of self-defense, which derives from international law,” he said.

“Upper Karabakh belongs to Azerbaijan. Azerbaijan conducts operations within its internationally recognized territories to protect its people and to reinstate its territorial unity and peace,” Oktay concluded.