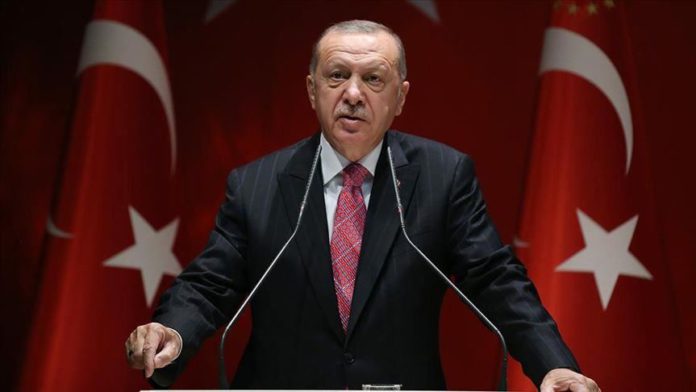 Turkey’s president on Thursday blamed Greece and the Greek Cypriot administration for increasing tensions in the Eastern Mediterranean by excluding Turkey and the Turkish Republic of Northern Cyprus (TRNC).

“It’s not Turkey that is increasing tensions in the Mediterranean, but rather the Greek Cypriot-Greek mentality attempting to disregard Turkey and the Turkish Republic of Northern Cyprus,” Recep Tayyip Erdogan said at the 19th foundation anniversary of his ruling Justice and Development (AK) Party.

Erdogan repeated Turkey’s call for dialogue and negotiation with Athens as “the only way to a resolution in the Eastern Mediterranean” for a “win-win solution.” “We’d never pursue an unnecessary adventure or stoke tensions.”

Reiterating that recent seismic research by Ankara’s drill ship, the MTA Oruc Reis, in the Eastern Mediterranean was within the boundaries of Turkey’s continental shelf, he stressed that Turkey had no interest in violating any other country’s rights but would also not allow infringements on its own.

He said all Turkey’s actions in the region were legitimate and that recent actions against Turkey by other countries were meant to encircle the country from the sea.

“We’ll never bow to this scheme. No country or company can conduct [drilling] surveys in our areas without our permission.”

Erdogan criticized Greece’s claims of maritime jurisdiction via its island of Meis, or Kastellorizo, off Turkey’s coast, saying that the case for a zone of 40,000 square kilometers (11,662 square nautical miles) via the roughly 10 square km (3.9 square miles) island was “ridiculous and unfounded.”

During his speech, Erdogan said he was due to hold phone talks separately with German Chancellor Angela Merkel and European Council President Charles Michel late on Thursday.

As part of the country’s hydrocarbon surveying activities, Turkey issued a NAVTEX (navigational telex) on Aug. 10, 2020, announcing that the Oruc Reis would begin conducting fresh seismic research in the Eastern Mediterranean.

Turkey’s decision came following a controversial delimitation deal signed between Greece and Egypt, only a day after Turkey said it would postpone its activities in the region as a sign of goodwill after mediation efforts from Germany.

But, after declaring the treaty “null and void,” Turkey authorized the Oruc Reis to continue its activities in an area within Turkey’s continental shelf.

Turkey has consistently contested the Greek Cypriot administration’s unilateral drilling in the Eastern Mediterranean, asserting that the TRNC also has rights to the resources in the area.