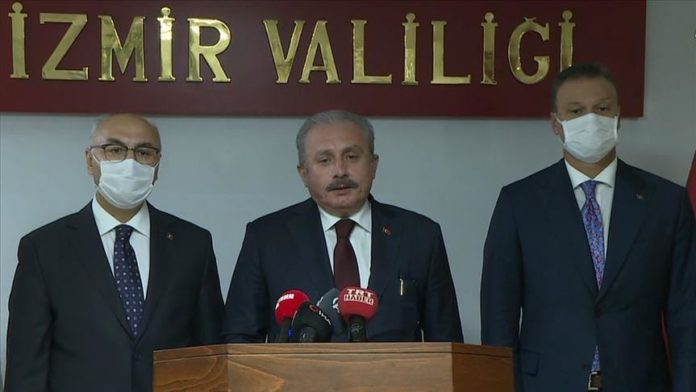 Greece should not let it be used by countries trying to exploit it for their own domestic political games and ambitions, said Turkey’s parliament speaker on Wednesday.

Instead, Greece must act with common sense and should respect international law, treaties, and Turkey’s rights in the Mediterranean, Mustafa Sentop told journalists in the Aegean province of Izmir.

Sentop said he wonders why other countries, especially France, follow Greece and try to be part of the region and seek their benefits in the Eastern Mediterranean Sea.

“Incompetent politicians try to cover up their wrongdoings in domestic politics with some unreasonable and irrational moves in the international arena,” he said.

Sentop stressed that the personal ambitions of such politicians threaten all neighboring countries in the region, especially Greece.

Turkish officials have decried France’s interference in the Eastern Mediterranean dispute, pointing out that it has no territory in the region. Commentators have argued President Emmanuel Macron is trying to distract from his political failures.

“There are countries trying to use Greece for their domestic political games and ambitions,” said Sentop.

He also warned the Greek people about trusting France, saying: “France has no military success in recent history.”

“History cannot be changed and written by ambitions and desires,” he added.

He underlined that Turkey is always open to diplomatic attempts to negotiate the Mediterranean issue, but if other countries want to try other methods, Turkey has the power to defeat them.

“Turkey has the power to do this. It is much more powerful than it was 100 years ago,” he said, referring to when Turkey defeated Greek forces in its War of National Independence.