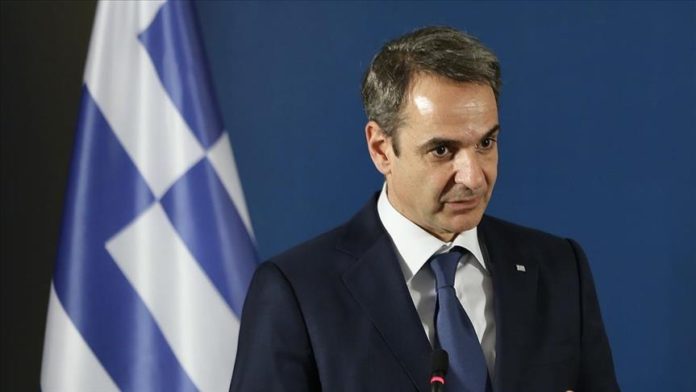 Greece and Libya have agreed to resume talks on the delimitation of maritime zones, a statement from Athens confirmed on Wednesday.

Greek Prime Minister Kyriakos Mitsotakis and Mohamed al-Menfi, the head of Libya’s Presidential Council visiting the Greek capital, “agreed on the immediate resumption of talks between Greece and Libya on the delimitation of maritime zones,” said a statement by the prime minister’s office.

Thanking al-Menfi for Libya’s positive approach, Mitsotakis said that all foreign troops should withdraw from Libya.

The statement stressed the importance of deepening economic ties between the two countries, adding that Greek Deputy Foreign Minister Kostas Fragogiannis will soon visit Libya to discuss the potential for economic cooperation.

Mitsotakis said bilateral relations are at the beginning of a very fruitful and productive period after some difficulties.

Al-Menfi agreed there had been “difficult times,” but added that “this can be solved through dialogue”.

On Libya’s sovereignty, al-Menfi said it is important that the UN and EU support Libya and expressed hope that Athens will continue to support them on all international platforms.

Al-Menfi was Libya’s ambassador to Athens before he was asked to leave Greece after the November 2019 signing of an agreement between Turkey and Libya on maritime boundaries.

Turkey has cited the agreement in its disputing Greece’s maximalist territorial claims in the Eastern Mediterranean, which would all but confine Turkey to shore while granting Greece continental shelves based on tiny islands near Turkish shores.

Visiting Turkey on Monday, Libyan Prime Minister Abdul Hamid Dbeibeh said: “With regard to the agreements signed between the two countries, especially the maritime ones, we confirm the validity of the frameworks on which these agreements were built and that they achieve the interests of both countries at the same time.”

Champions League: Basaksehir to take on PSG in Group H