TurkishPress
Home News 'Greece has no intention for agreement in Cyprus' 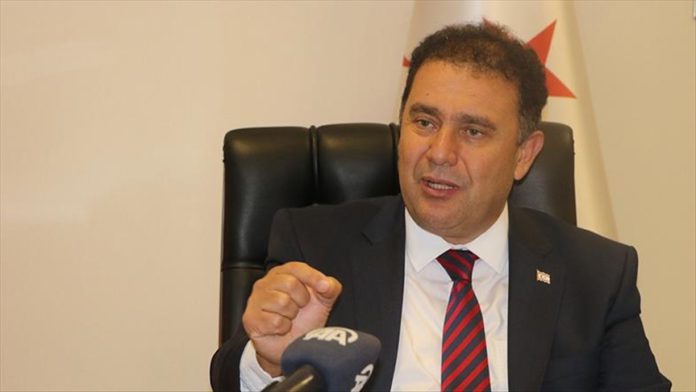 The Turkish Cypriot prime minister on Tuesday said Greece and the Greek Cypriots have no intention of resolving the Cyprus issue through an agreement.

“The Greek-Greek Cypriot duo does not intend to resolve the Cyprus matter in an acceptable agreement,” said Ersan Saner, referring to Greek Prime Minister Kyriakos Mitsotakis’ remarks on Monday.

“Their dream is to disconnect Turkey from the Cyprus Island and Turkish Cypriots, make us a patch with minority rights on the alleged Republic of Cyprus, which has been turning into a Greek state, and to take the island under the hegemony of the Greek nation’s interests,” he added.

Saner noted: “The Greece-Greek Cypriot duo is still against building a new partnership. They say openly that they expect the alleged Republic of Cyprus to evolve to become a federal state, and us to be a patch on that structure.”

He said Greece and the Greek Cypriots reject the sovereign equality of the Turkish Cypriots and claim to desire a so-called functional state structure.

“Indeed, they intend to exclude us from the decisions to be taken, deprive us of our right of veto which we had even during the time of Republic of Cyprus, which was founded in 1960,” he added.

Recalling Greek Cypriot administration leader Nicos Anastasiades’ remarks describing Turkey’s guarantor system as “outdated,” Saner said: “It is thanks to those guarantees that we as Turkish Cypriots can still exist on this island with our own identities.”

Saner condemned Mitsotakis’ remarks during the news conference with Anastasiades on Monday.

“If there is an occupying party on Cyprus, it is the Greek side who dismissed us from the Republic of Cyprus by force of arms, and who claim our mutual state its own,” he added.

In a joint statement following a meeting in Southern Cyprus, Greek Prime Minister Kyriakos Mitsotakis and Greek Cypriot administration leader Nicos Anastasiades reiterated their desire to participate in an informal 5+1 meeting on Cyprus – with the two sides on the island, the guarantor countries, and the UN – but refused to discuss any solution on Cyprus not based a bi-communal, bi-zonal federation.

Anastasiades said reunification of the island should include the end of the “outdated” guarantor system and the withdrawal of Turkey’s troops from Cyprus, deployed there to protect Turkish Cypriots from ethnic violence.

Russia, Turkey plan new round of talks on Idlib, Syria