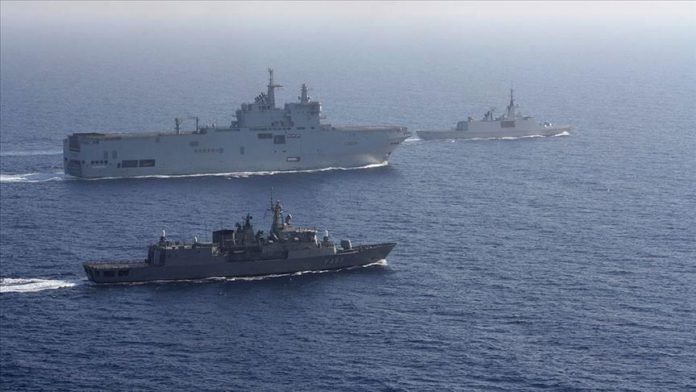 With tensions mounting in the region after Athens’ controversial new pact with Egypt, Greek defense sources on Thursday announced joint military drills in the Eastern Mediterranean along with France, another country that has sought to hem in Turkey’s maritime territory.

The exercise, including two French Rafale fighter jets, was held off the island of Crete after France announced Wednesday that it would beef up its military presence in the region.

“I have decided to temporarily reinforce the French military presence in the eastern Mediterranean in the coming days, in cooperation with European partners, including Greece,” Macron wrote on Twitter.

France said Thursday that it was sending two Rafale fighter jets and the naval frigate Lafayette to the Eastern Mediterranean.

The drills follow Turkey resuming energy exploration in the Eastern Mediterranean on Monday, just after the signing of the Greek-Egyptian maritime pact, which Turkey has called illegal.

The pact was signed only a day after Turkey had postponed its activities in the region as a sign of goodwill.

But after declaring the Athens-Cairo pact “null and void,” Turkey authorized its Oruc Reis drill ship to continue its activities in an area within Turkey’s continental shelf.

The ship will continue exploration in the Eastern Mediterranean along with the Cengiz Han and Ataman ships until Aug. 23.

Turkey has consistently opposed efforts for Greece to declare an exclusive economic zone based on small islands near Turkish shores, violating the interests of Turkey, the country with the longest coast on the Aegean and Mediterranean.

Turkey has urged talks to reach a deal with fair sharing of the region’s resources.

* writing and contributions by Iclal Turan in Ankara