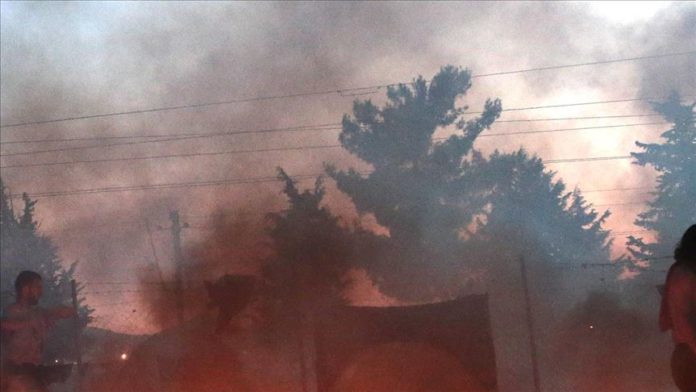 Thousands of migrants and refugees fled a camp on a Greek Aegean island after a fire broke out early Wednesday, officials said.

The Moria camp on the island of Lesbos, near the Turkish coast – recently home to around 13,000 thousand people, about four times its capacity – has been under lockdown since last week after one of its residents tested positive for coronavirus. The number of people infected quickly grew to dozens.

The fire started overnight under unknown circumstances and it has reportedly gutted the camp, making it an almost total loss. It is unclear where the migrants will be housed.

Riot police were deployed to the area to stop migrants entering the capital Mytilene, with reinforcements flown in on a C-130 from Elefsina, an air base on the mainland near Athens.

Speaking to reporters, the island’s mayor said the situation is very difficult as many of those in the streets outside the camp might include people who have tested positive for the virus.

So far there are no reports of injuries or fatalities.

France: Activists on trial for trying to seize artwork