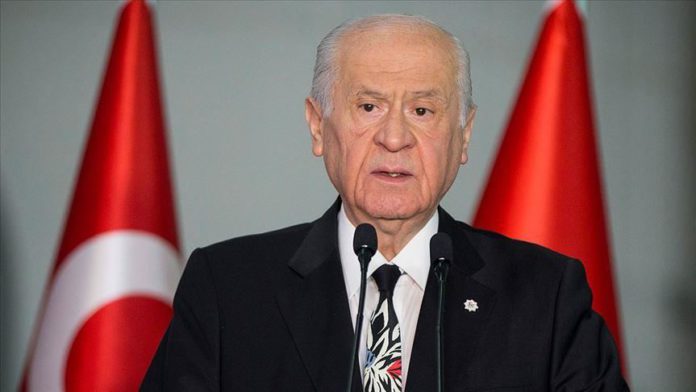 Global and regional tension is worrying, and the port blast in Beirut has also negatively affected Lebanon’s internal politics and the regional dynamics, he said.

Stressing that the Beirut blast was one of the gravest calamities of our time, Bahceli said the event would be investigated and the possibility of sabotage or neglect would soon come to light. All problems in Lebanon affect Syria, Iran, Iraq, Jordan, Israel, Cyprus, and the world, he added.

Saying that a visit last week to Lebanon by two top Turkish officials was very timely, Bahceli added: “Turkey is acting in line with its historical responsibility towards its brothers in Lebanon.”

“The Beirut explosion happened […] while Turkey and Greece are in a face-off. Two days later, Greece and Egypt signed a so-called maritime deal. The area that is supposedly demarcated by these two countries is clearly on Turkey’s continental shelf. This also violates Libya’s maritime jurisdiction. While Greece sits in negotiations with Turkey in Germany, it also signs a so-called and null agreement with Egypt, and this is an unethical setup,” Bahceli said.

A powerful explosion rocked Beirut port on Aug. 4 after a neglected stockpile of 2,750 tons of ammonium nitrate stored in a warehouse ignited, killing at least 171 people, injuring 6,000 others and leaving approximately 300,000 people homeless. The blast took place at a time when Lebanon was already dealing with a severe financial crisis and the coronavirus pandemic.

Turkey in Mediterranean to stay

Bahceli accused “those who want to isolate Turkey from […] the Eastern Mediterranean” of also trying to cut Ankara off from Lebanon.

Greece is in a hostile approach, but Turkey is not afraid to retaliate, Bahceli said.

Turkey’s seismic research ship, the Oruc Reis, “will always protect our rights in the Mediterranean. If anyone comes against Turkey, they’ll face retaliation”, he added.

Turkey won’t give up on Blue Homeland

Greece is acting in violation of the Lausanne Agreement and acting against the unarmed status of the Aegean islands, according to Bahceli. “Greece should retreat from the islands and rocks, which it invaded illegally. It should disarm the islands and stop its provocations in the Mediterranean.”

“The maritime, air and land disagreements between Greece and Turkey should be resolved through diplomacy. Solutions within international law and neighbor countries’ rights can yield results. Turkey cannot give up on its Blue Homeland and turn its back on its own jurisdiction area,” he said.

Ankara’s sovereignty will always be defended and Greece and Egypt should reconsider their so-called agreement and partnerships, Bahceli added.

He said that Turkey was increasingly being surrounded by a ring of fire, with the situation in the Southern Caucasus becoming more complex and post-election unrest erupting in Belarus due to “foreign pressure.”

“While all these happen in foreign politics, there are efforts to harm Turkey and Syria’s, as well as Turkey’s and Lebanon’s, brotherhood,” he added.

“Turkey is an independent state. If we cannot protect our rights, we will lose our national dignity. Our party will do everything in its power to support this purpose,” Bahceli said.

In 1974, following a coup aiming at Cyprus’s annexation by Greece, Ankara had to intervene as a guarantor power. In 1983, the TRNC was founded.

The decades since have seen several attempts to resolve the Cyprus dispute, all ending in failure. The latest one, held with the participation of the guarantor countries — Turkey, Greece, and the UK — came to an end without any progress in 2017 in Switzerland.