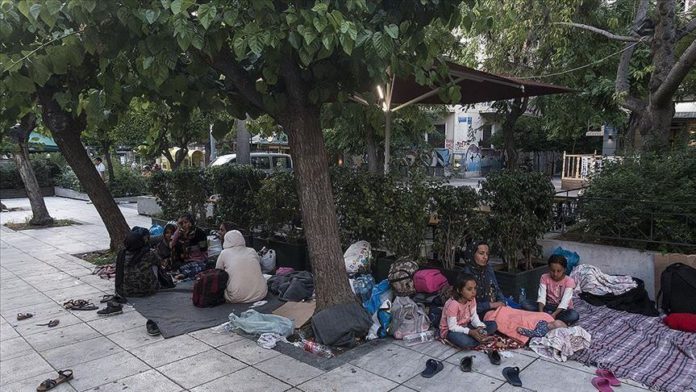 With the roof on their heads snatched away, Afghan asylum seekers have to spend the nights on the streets of Athens.

They were expelled from the Moria Camp on Lesbos Island in Greece after being granted asylum. However, as the funding from the EU for their accommodation has ended, they were abandoned by the Greek authorities.

The group seeking shelter at Victoria Square, a public park in the capital, comprises of 66 people, including four pregnant women and children.

“They told us we have to leave Moria Camp. They said: ‘Go to Athens, finish your paper work and go wherever you want after that’,” said Alireza, who came to Athens two days ago.

“I don’t get that. We are refugees. They officially left us here. Imagine that you came to Afghanistan and did not speak the language. And nobody guides you. How would you feel?” said another refugee who spent the night in the street.

Petros Konstantinou, head of the United Movement Against Racism and the Fascist Threat (KEERFA), said Athens municipality reacted to the situation passively and called the authorities to take action.

“This is the result of the government’s racist policy that leaves 11,000 refugees homeless without providing the conditions for their integration into society,” he said.

Many refugees who obtained asylum rights are in the danger of becoming homeless after EU funded accommodation programs for refugees ended in Greece.