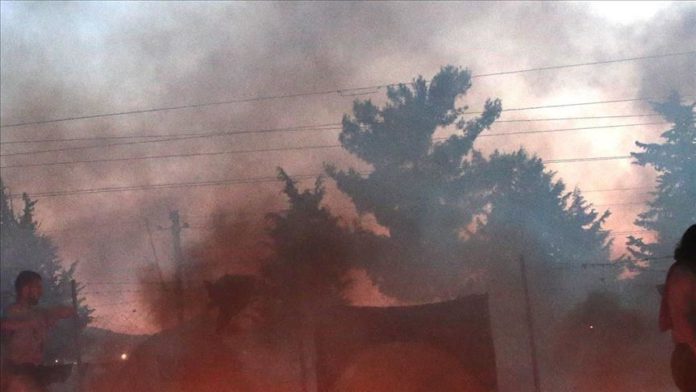 Greek authorities on Tuesday arrested several arsonists over a fire at the Moria refugee camp on the Greek island of Lesvos, a senior official said.

“The arsonists of Moria are being detained,” Citizen Protection Minister Michalis Chrisochoidis told reporters on the island of Lesvos, adding that five young foreign nationals were now under police custody while another is at large.

According to authorities, the fire was started by a small group of asylum seekers that were angered by isolation measures to curb the novel coronavirus outbreak after dozens tested positive.

The camp had already been under lockdown since early September after a 40-year old Somali resident tested positive.

Moria camp was one of Greece’s largest reception and identification centers, recently home to around 13,000 people — about four times its capacity.
After the blaze, thousands of refugees and migrants were stranded without shelter, food or water having lost all of their belongings.

Pictures that have been circulating online showed refugees, including hundreds of children and infants, sleeping in nearby cemeteries and fields unprotected.

A new temporary facility has been under construction, authorities said on Monday, while a few unaccompanied children have been moved off Lesvos.

While Greece is struggling to get past the Moria camp tragedy, migrants are still trying to reach its shores, many of them unsuccessfully.

A search-and-rescue operation is underway after a smuggling boat sank 12 nautical miles east of Crete on Monday evening, with 57 people rescued from the sea so far.