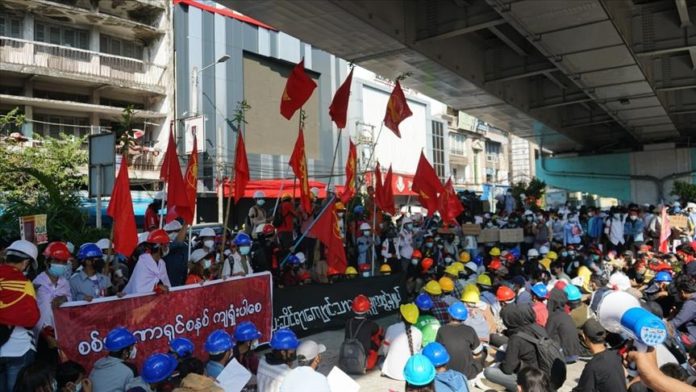 Big rallies were taken from Yangon, the country’s second-largest city of Mandalay, and the capital Naypyitaw, as well as small demonstrations in other cities of the Southeast Asian country.

Some protesters went to embassies in Yangon, including the Chinese Embassy, appealing to stop its support to the National Administrative Council, formed by military chief Gen. Min Aung Hlaing after the coup on Feb. 1.

Protesters said police showed up quickly asking them to leave the area.

The public transport system in the largest city of Myanmar appeared to grind to a halt partly because the staff at the government-run gas stations went on strike.

In Mandalay, hundreds of Buddhist monks joined the rallies and marched through the city.

In downtown Yangon, some young protesters were dressed in fancy clothing, while some were topless to demonstrate their resentments against the military coup.

So far, the police in Yangon have not discouraged the protesters as they neither used water cannons nor fired rubber bullets at them. As a precautionary measure, some protesters were seen carrying large metal pans and umbrellas to counter police action.

On Tuesday, several people were injured, two in critical condition, when police in Naypyitaw used water cannon and fired rubber bullets to confront the protesters. The two critically wounded were admitted to a public hospital.

Min Than, a 53-year-old resident of Sanchaung township in Yangon, praised the way young people protested against the military junta.

“We, the old generation, are eager to confront the police and the soldiers, but the younger generation doesn’t want it and has not done it. It is a smart way to avoid confronting the police because they have nothing to offer except the baton, the water cannon, the tear gas, and the bullet,” he told Anadolu Agency on Wednesday.

“We’re not trained to resist water cannon and tear gas, but we can’t simply stay at home in fear,” said Myo Ma Ma, a 21-year-old student who joined a rally in Yangon’s Hlaing township.

Aung Phyo, a protester in his 20s and a medical college student, said the elderly might consider that the young generation is not serious about fighting the military junta.

“In fact, we are very serious, but we have learned from the past that we can’t confront them. We are unarmed civilians while they hold weapons and have no mercy,” he said.

“So, we have to be very smart to fight them. We must use technology and creativity to express our opposition to the military rule,” said Aung.