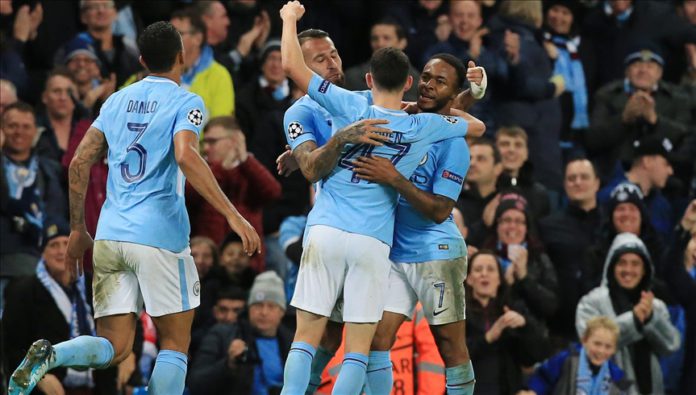 Algerian winger Riyad Mahrez fired from the white spot as Manchester City doubled the lead in the 14th minute.

Seven minutes later, Ilkay Gundogan tapped the ball into the Leicester City net after following a rebound by Schmeichel.

A few minutes later, Man City were given another penalty as Raheem Sterling was tripped by Tielemans in the box.

Sterling converted the penalty successfully to make it 4-0 in the 25th minute.

Man City led the first half 4-0 at home.

Leicester City reacted in the second half as the visitors’ forward James Maddison scored on a counter attack after several passes in the 55th minute.

Four minutes later, Ademola Lookman made it 2-4, finishing in a one-on-one against Man City goalie Ederson.

Leicester City’s Kelechi Iheanacho made a close finish in the minute 65 as his goal gave the Foxes a hope of a possible comeback at the Etihad Stadium, 3-4.

Man City’s Laporte scored a header from a corner kick taken by Mahrez in the 69th minute to make it 5-3. Schmeichel did not move.

Sterling added another goal for Man City in the 87th minute.

League leaders Manchester City have 47 points in 19 matches, and second-place Liverpool are currently six points behind them.

Earlier this week, the Premier League postponed the Liverpool vs. Leeds United fixture, which had been scheduled to be held on Boxing Day, due to COVID-19 cases and injuries at the Leeds squad.

Meanwhile, Leicester City moved down to the mid-table with 22 points.

Victors Manchester City have been in a perfect run in the league since November.

After an unexpected home loss against underdogs Crystal Palace by 2-0 on Oct. 30, Manchester City bounced back.

In the next fixture, Manchester City will visit Brentford on Wednesday.

The Gunners’ English midfielder Bukayo Saka scored twice as Arsenal bagged an extravagant win in an away match.

Norwich City are at the bottom of the Premier League with 10 points.