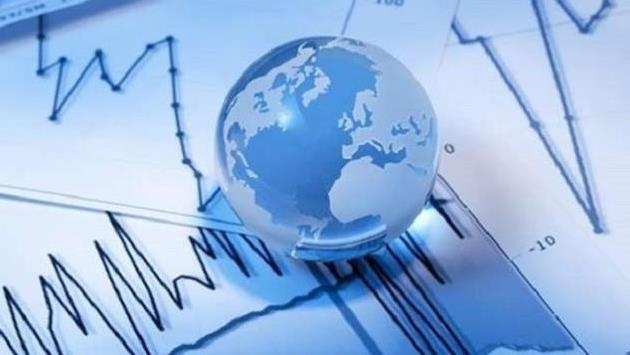 In global markets, the increased risk perception over fears of a Russian invasion of Ukraine has persisted at the beginning of the new week.

After the US officials’ statements on Friday regarding the crisis between Russia and Ukraine, the diplomatic steps taken over the weekend were not enough to boost investor confidence.

US President Joe Biden assured his Ukrainian counterpart Volodymyr Zelensky Sunday that the US would “respond swiftly and decisively” to any further Russian aggression against Ukraine.

Zelensky thanked Biden for America’s “unwavering support” and invited him to visit Ukraine.

Commodity prices have risen to the highest levels in the recent years after growing tensions, with the situation expected to affect the economic recovery.

Following the increasing inflation pressure in the US, the probability of the US Federal Reserve’s interest rate hike of 50 basis points in March has weakened.

Energy prices already play an important role in the increasing inflation pressure worldwide, according to analysts who argued that increased price volatility in these assets might affect the uncertainty in monetary policies as well.

As investors’ demand for safe-haven assets increased after rising geopolitical risks, the gold ounce price closed Friday at $1,859 with a 1.76% increase after hitting $1,865, the record high since November 2021.

The price of one ounce of gold started the new week with a slight decline and stabilized at $1,853.

In the EU side, markets will focus on European Central Bank Governor Christine Lagarde’s speech on Monday.

According to analysts, Lagarde moved away from the hawkish stance in the statements last week. They also said the European Central Banks’s evaluations about possible effects of the Russia-Ukraine crisis on the region’s economy will be important.

European indices are also moving in a downward trend on Monday.

In Asia, a negative trend is observed in the stock markets on Monday due to rising COVID-19 cases, decreasing global risk appetite, and concerns about the real estate sector in China.

All major Asian indices were also down at Friday’s close.

Analysts said Russia-Ukraine tension will continue to be the main global agenda topic.