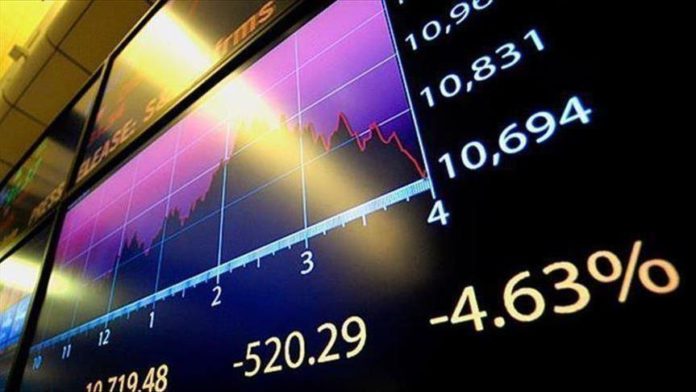 While increasing tensions between Russia, the US, and NATO over Ukraine have caused heavy selling in global stock markets on Tuesday, investors will focus on inflation figures from the UK and Germany on Wednesday.

While the expectations that central banks will tighten their monetary policies more rapidly continue to affect the investor risk perception negatively, the increasing number of coronavirus omicron cases, especially in Asian countries, remains on the agenda.

The European Parliament subcommittees on foreign relations and security and defense held a joint meeting on Tuesday about the ongoing Ukrainian crisis, while White House spokesperson Jen Psaki said that all options are on the table in case Russia invades Ukraine, adding that Russia can attack Ukraine any moment.

Amid growing geopolitical risks, the price of Brent oil reached $88.4 per barrel, the highest level since October 2014.

The losses in the Russian stocks spread to the global stock markets, especially to the emerging ones.

The 10-year bond yield of the US kept its position at the peak of two years by testing 1.90% due to the concerns about inflation and the continuing uncertainties about the economic activity.

The net profit of US bank Goldman Sachs, which announced its balance sheet on Tuesday, decreased 13% in the last quarter of 2021 compared to the same period of the previous year, reaching $3.94 billion.

While the bank’s shares lost nearly 7% after its worse-than-expected balance sheet, a sales-oriented course was followed in the New York stock market.

On the European side, the ZEW economic expectations index revealed that the economic outlook has improved visibly since the beginning of the new year.

Increasing oil prices and the concerns about Russia-Ukraine tensions and energy supply caused a decrease in the stock markets. All major European indices closed the day in red.

In Asia, the increase in the number of COVID-19 cases remains the focus of the agenda, as countries continue to tighten measures, especially in China, Australia, and Japan.

Turkiye’s Borsa Istanbul index was also affected by global developments and fell 5.08% to close at 1,979.83 points on Tuesday.