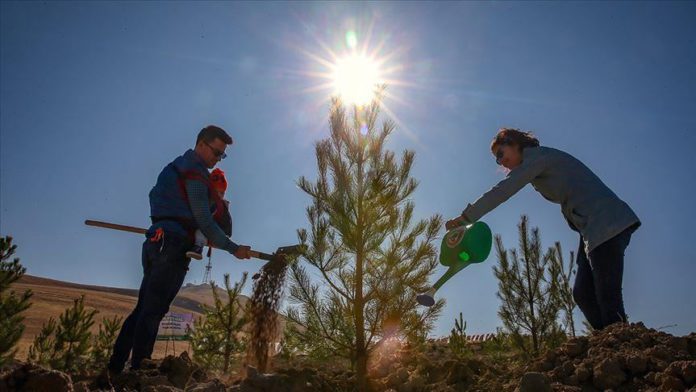 May saw a number of reports on species that face the threat of extinction globally and bans on wildlife consumption to curb the spread of the novel coronavirus as well as the record-setting seizure of 26 tons of illegal dried shark fin in Hong Kong.

The following is a look at environmental developments, reports, events, and stories during the previous month.

Turkey will open Health Heroes Memorial Forest in 81 provinces to honor health workers for their devoted struggle in fighting the new coronavirus. Over 1 million saplings will be named after country’s health care professionals, Agriculture and Forestry Minister Bekir Pakdemirli announces.

The first brown bear in 150 years was spotted in a national park in northern Spain, an image captured by camera shows.

Pangolins — one of the world’s most trafficked mammals, which have recently emerged as a possible conduit in the transmission of COVID-19 to humans — are openly being sold on Facebook, according to an investigation conducted by the Tech Transparency Project.

A record shipment of 26 tons of illegal dried shark fins was discovered in Hong Kong, which is the largest of its kind ever to be seized in the region.

UNEP stresses importance of conserving as well as restoring ecosystems which support the survival and well-being of migratory birds, “given that the destruction of nature has also been linked to the kinds of infectious diseases we are now combating” such as the coronavirus.

Global average sea level rise could exceed 1 meter (3.2 feet) by 2100 and 5 meters (16.4 feet) by 2300 in the worst-case scenario if the world fails to meet global emission targets, according to a study conducted by Nanyang Technological University in Singapore.

Deforestation in the Amazon rainforest in Brazil breaks a new record in the first four months of 2020, with over 1,200 square kilometers (463 square miles) of forests disappearing, according to Brazil’s National Space Research Institute.

The first leg of the World Migratory Bird Day is observed around the world.

COVID-19 lockdowns are clearing the air, but pollution will return after the pandemic disappears as economies reopen, Daniel Cohan, an expert on air, climate and energy at Rice University in the US, says in an opinion piece published by Air Quality News.

Inger Andersen, the executive director of UN Environment Programme, says with COVID-19, the planet has delivered its strongest warning to date that humanity must change.

Hundreds of thousands of tons of plastic waste in oceans could return to shores with the sea breeze every year, according to a study published in the PLOS One journal.

The native guava is one of the first Australian plants that is close to being wiped out by a fungal plant disease, according to a new study conducted by scientists from the Australian government’s National Environmental Science Program, phys.org reported.

The European Commission warns Bulgaria and Poland of legal action over preventing people from going to court over air pollution concerns.

The University of California announces that it has fully divested from fossil fuels, making it the largest university in the US to do so.

Authorities in China’s Wuhan city, the ground zero of the coronavirus outbreak, officially ban the consumption of all kinds of wild animals.

Parts of Antarctica are turning to green due to climate change, according to a study published in the journal Nature Communications.

At least 1,677 of 15,060 assessed European species are threatened with extinction. Of 1,677, the most endangered are snails, clams, and fishes, says European Parliament.

A total of 1,900 species of bees in Mexico face the threat of extinction mainly due to insecticides and deforestation, says Ricardo Ayala Barajas, a researcher at National Autonomous University, on the occasion of World Bee Day.

British consumers threaten over 2,800 species with extinction, including orangutan populations in Sumatra, Indonesia and wild cat populations in South America, by buying products containing palm oil, soy, and paper and pulp, according to reports by WWF and Royal Society for the Protection of Birds.

The International Day for Biological Diversity, celebrated annually, is observed with the theme “Our solutions are in nature,” which stresses re-examining “our relationship with the natural world,” according to the UN.

Brazil’s Environment Minister Ricardo Salles calls on the government to use the coronavirus pandemic to advance “environmental deregulation.”

Exposure to air pollution contributes to the beginning of Parkinson’s disease, according to new findings published on toxicological sciences, Air Quality News reports.

G20 countries have provided at least $77 billion a year in public finances to fossil fuels projects since Paris Agreement was adopted in 2015, according to a new report released by Friends of the Earth US and Oil Change International.