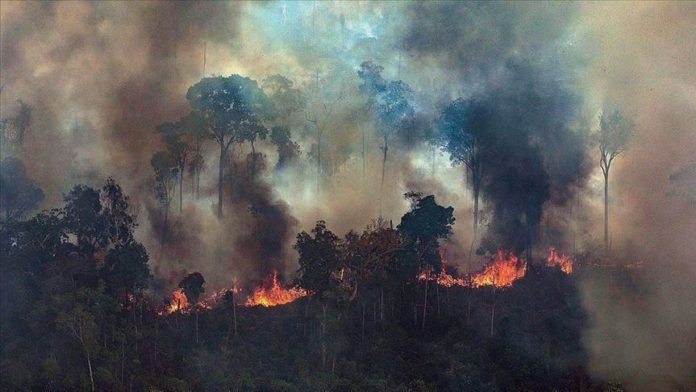 July saw a number of reports about illegal wildlife trade and species that are under threat of extinction as well as Vietnam’s ban of import of wildlife products.

Here is a look at environmental developments, reports, events, and stories during that month compiled by Anadolu Agency.

The number of fires in the Amazon rainforest rises 20% in June to a 13-year-high for the month, with a total of 2,248 fires detected — up from 1,880 in June 2019, according to Brazil’s National Institute for Space Research (INPE) data.

The UN’s Global E-Waste Monitor releases its report, saying a record 53.6 million tonnes (59.1 US tons) of e-waste was produced globally in last year.

Japanese alpine plants are threatened by the invasion of dwarf bamboo species in the mountainous regions of the country, according to Kyodo news agency.

Duke Energy and Dominion Energy cancel Atlantic Coast Pipeline that was to stretch across US states of West Virginia, Virginia and North Carolina.

The Wildlife Conservation Society captures the first images of the Cross River, the world’s rarest gorillas, together with several infants in southern Nigeria.

India launches a solar power plant to stop reliance on imports from neighbors China and Pakistan.

Almost all species of lemur, native to Madagascar, face extinction, warns the International Union for the Conservation of Nature (IUCN).

Pakistan achieves UN Sustainable Development Goal for protecting environment and holding off climate change a decade before the deadline, according to the UN Development Program (UNDP) and Pakistan’s Climate Change Ministry.

Indonesia approves the construction of a road by a coal company that would cut through Sumatra’s Harapan forest that hosts tigers and elephants, according to media reports.

Samsung announces a halt to money support for Adani’s climate-wrecking port and coal project two days after climate activists gather outside the company’s building in Sydney, Australia as part of the “Stop Adani [coal projects in Australia]” campaign.

A court in Malawi sentences nine members of a wildlife trafficking gang in Africa’s south to a total of over 56 years, according to the UK-based Environmental Investigation Agency.

Experts add the North Atlantic right whale to the list of critically endangered species, one step from extinction.

Investment management service Friends Fiduciary goes “fossil free” in all funds as it announces that it will exclude fossil fuel companies from all its portfolios.

Katta O’Donnell, a 23-year-old law student, sues the Australian government for failing to disclose climate change-related risks to investors in its sovereign bonds, according to reports.

The International Union for Conservation of Nature (IUCN) unveils a “Global Standard,” providing the first-ever set of benchmarks for nature-based solutions to global challenges which will help governments, businesses and civil society to maximize potential to help address climate change and biodiversity loss.

Vietnam bans the import of wildlife and wildlife products to reduce the risk of further pandemics.

Cameroon gives a green light to logging concession in Ebo Forest, a gorilla habitat, according to reports.

Seven young climate activists ranging from 18 to 28 years old are to take a formal seat at the UN table in the Secretary-General’s new Youth Advisory Group on Climate Change, announces the UN.

Deutsche Bank says it will no longer finance new projects in the Arctic region or oil sands projects — the latest bank action on fossil fuels.

Australia’s bushfires killed or displaced nearly 3 billion animals, including mammals, reptiles, birds and frogs during period dubbed the “Black Summer,” according to the interim report, Australia’s 2019-2020 Bushfires: The Wildlife Toll.

Celebrated annually to increase awareness about protection of natural resources, World Nature Conservation Day is observed around the world.

More than 1,000 areas across England are in breach of air pollution limits, according to a Friends of the Earth study and Air Quality News reports.

International Tiger Day is marked worldwide to raise awareness on the state of the tiger population.

Estimates place 2020 as likely to be warmest or second-warmest year on record, according to the Carbon Brief.