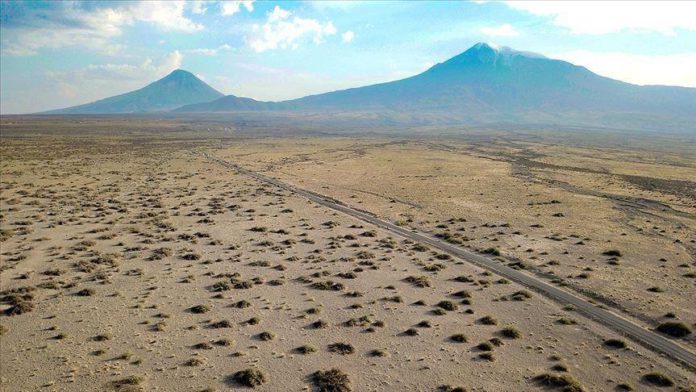 The year 2020 saw many major developments towards protecting wildlife and the environment, including bans on illegal wildlife trades and single use plastics while many more reports were released on increasing threats to nature as well as wildlife.

Here is a look at global environmental developments, reports, events, and stories of 2020 compiled by Anadolu Agency.

– According to the latest research published on Journal Advances In Atmospheric Sciences, heat in the world’s oceans reaches a new record level in 2019 and the past five years are the top five hottest years recorded in the ocean, and the last 10 years are the top decade on record.

– More than 5,000 camels are killed by Australian authorities in what they called “urgent response to threats” posed by the rising number of feral camels due to drought.

– 2019 was the second hottest year on record globally, according to National Oceanic and Atmospheric Administration and NASA.

– Microsoft announces it will be carbon negative by 2030 and remove from the environment by 2050 all the carbon companies emitted either directly or by electrical consumption.

– Wild animal circuses are banned in England as of today.

– British daily The Guardian becomes the first global news organization to ban an advertisement from oil and gas companies.

– Japan announces plans to build more than 20 new coal-fired power plants at a time many countries pledge to shut down theirs as they are known as the “dirtiest” source of energy.

– The UN weather authority describes the record high temperature of 18 degrees Celsius (64 degrees Fahrenheit) in the Antarctic region as the latest worrying sign of climate change.

– Pope Francis calls for action on the Amazon forest and describes the destruction of it as a crime.

– Some 900,000 pangolins were trafficked, over 200 tons of African elephant ivory and 100,000 pig-nosed turtles were seized in recent years in the Southeast Asian countries, according to a report from TRAFFIC organization.

– China officially bans the trade and consumption of wild animals over deadly the coronavirus outbreak, as legislative committee passes a comprehensive ban.

– World Meteorological Organization releases the State of Global Climate Report 2019 which indicates that greenhouse gas concentrations continued to rise last year with no signs of a slowdown so far in 2020.

– Both the Arctic and Antarctica saw below mean sea ice cover in the last month compared to the 1981-2010 average, according to Copernicus Climate Change Service, Europe’s climate body.

– Microplastics are generated even when opening plastic packaging, according to a report published on Scientific Reports website.

– In its February report, German-based search engine Ecosia announces it has “planted” nearly 1 million trees in Brazil, Burkina Faso, and Tanzania in the last month.

– A 36% decline in air pollution in Istanbul during parts of March is clear evidence that the measures taken against the coronavirus increase air quality, according to a Turkish expert in atmospheric science and air quality.

– Authorities in Malaysia announce the seizure of over six tons of pangolin scales worth nearly $18 million — the country’s biggest seizure this year so far.

– The UN climate change conference (COP26) in Glasgow, Scotland is postponed due to uncertain times ahead amid the novel coronavirus pandemic.

– Chile will peak its greenhouse gas emissions by 2025, the country says in an updated national plan presented to the UN.

– The longest animal ever, 150-foot-long (45 meters) siphonophore — a stringy creature like coral — is discovered in a deep-sea canyon off Australia.

– Austria becomes the second European country to eliminate coal from electricity production after the shutdown of its last coal power plant.

– The National Oceanic and Atmospheric Administration projects that 2020 will be the warmest year, beating 2016, the El Nino year.

– A camera image shows that the first brown bear in 150 years has been spotted in a national park in northern Spain.

– A record shipment of 26 tons of illegal dried shark fins was discovered in Hong Kong, which is the largest of its kind ever to be seized in the region.

– Deforestation in the Amazon rainforest in Brazil breaks a new record in the first four months of 2020, with over 1,200 square kilometers (463 square miles) of forests disappearing.

– Severe climate conditions displace nearly half a million people, including at least 240,000 children, in Burundi, Rwanda, Djibouti, Kenya, Ethiopia, Somalia, Uganda, and Tanzania, according to the humanitarian group Save the Children.

– The University of California announces that it has fully divested from fossil fuels, making it the largest university in the US to do so.

– At least 1,677 of 15,060 assessed European species are threatened with extinction. The most endangered are snails, clams, and fishes, says European Parliament.

– Russia declares a state of emergency in the Siberian city of Norilsk following a major fuel leak in the environmentally sensitive Arctic Circle.

– China upgrades the national protection status of its native pangolin species which brings the world’s most-trafficked mammal under the highest form of protection as part of national legislation.

– The Ethiopia government announces its plans to plant 5 billion seedlings during this year’s rainy season. “This is part of our larger goal of planting 20 billion trees during a four-year period,” says Prime Minister Abiy Ahmed.

– China removes the pangolin scales from an official 2020 list of traditional medicines as part of efforts to protect its population.

– Croatian authorities declare a natural disaster in the country’s northernmost province after 50 million bees are found dead in the region of Medzimurje.

– Germany bans single-use plastic products, which will come into effect from July 2021, as the Cabinet agrees in line with an EU directive to reduce waste.

– The smooth handfish, also known as Sympterichthys unipennis in scientific classification, officially goes extinct, according to a report by Mongabay, a US-based conservation and environmental science news platform.

– Japanese alpine plants are threatened by the invasion of dwarf bamboo species in the mountainous regions of the country, according to Kyodo news agency.

– Pakistan achieves UN Sustainable Development Goal for protecting the environment and holding off climate change a decade before the deadline, according to the UN Development Program and Pakistan’s Climate Change Ministry.

– Experts add the North Atlantic right whale to the list of critically endangered species, one step from extinction.

– Vietnam bans the import of wildlife and wildlife products to reduce the risk of further pandemics.

– Deutsche Bank says it will no longer finance new projects in the Arctic region or oil sands projects — the latest bank action on fossil fuels.

– A group of 36 Brazilian companies and four business organizations write to the National Council for the Legal Amazon led by Vice President Hamilton Mourao, seeking “strong and effective” measures against illegal deforestation in the Amazon and other areas.

– In 2020 so far 303 leopards die in India, 93 of them are killed by poachers, according to the Wildlife Protection Society of India.

– Air pollution remains Europe’s top environmental threat to health, with more than 400,000 premature deaths due to air pollution every year in the EU, according to a European Environment Agency report.

– The northern hemisphere is experiencing its hottest summer on record, while dry weather and climate change continue to cause wildfires across western US states, according to the US National Oceanic and Atmospheric Administration.

– Sub-Saharan Africa is more vulnerable to climate change than any other region, threatening lives and livelihoods, and undermining economic growth, says the head of the IMF.

– The World Meteorological Organization recognizes a temperature of minus 69.6 C (minus 93.3 F) on Dec. 22, 1991 as the lowest-ever recorded in the northern hemisphere.

– Pangolins continue to face extinction despite new regulations and bans toward the protection of the “scaly anteaters” by southeast Asian nations.

– Canada introduces a plan to ban harmful single-use plastics by the end of 2021.

– Reports say koalas, which were highly affected by unprecedented wildfires in 2019, are at risk of becoming extinct from nature in New South Wales, Australia.

– India’s only pitcher plant, known as Nepenthes khasiana, is at risk due to wild plant collection in the country, says local media.

– The US officially exits the Paris Agreement, making the country the only major polluter in the world leaving the historic pact reached to combat climate change.

– The African migratory red locust outbreak in Namibia’s Zambezi region is brought under control after a team of experts fought the plague for several weeks.

– Global actions to tackle climate change are currently failing to protect the people who are most at risk, the International Red Cross said in a report, noting that over the past decade, 83% of disasters are caused by extreme weather and climate-related events.

– The British government announces that the sale of new petrol and diesel cars to be banned in the UK after 2030, as part of a plan to tackle climate change.

– CO2 level in the atmosphere hits a new record of 410.5 parts per million in 2019 and will likely rise this year despite a minor cut in emissions due to COVID-19 lockdowns, according to the World Meteorological Organization (WMO).

– China announces banning all kinds of solid waste imports as of January next year.

– Australia breaks the record for its warmest November in history, according to local media.

– Amid a loosening of environmental laws under Brazil’s President Jair Bolsonaro, deforestation in the Amazon rainforest exceeds 11,000 square kilometers (4,247 square miles), according to official data.

– The World Meteorological Organization’s (WMO) provisional annual climate report says 2020 is on track to be one of the three warmest years on record after 2016 and 2019.

– The world needs to decrease fossil fuel production by 6% per year to limit global warming to 1.5 C (34.7 F) between 2020 and 2030, according to the United Nations Environment Program’s 2020 Production Gap Report.

– After a difficult period for all humanity in 2020 due to the global COVID-19 crisis, experts told Anadolu Agency that they project worse problems in the coming period, including famines related to climate change and the pandemic.

– Globally, November 2020 is the warmest November on record, with the global average of 0.1 degrees Celcius warmer than the previous warmest November in 2016 and 2019, according to Europe’s climate body.

– More than 60,000 koalas are killed, injured or displaced by the last summer’s bushfire crisis in Australia, according to the World Wide Fund for Nature.

– A green pandemic recovery could bring the world closer to meeting the 2 degrees Celsius goal of the Paris Agreement on climate change by cutting up to 25% of the predicted 2030 greenhouse gas emissions, according to a new UN Environment Programme report.

– The EU Council announces that EU leaders have agreed on cutting their greenhouse emissions by 55% by 2030.