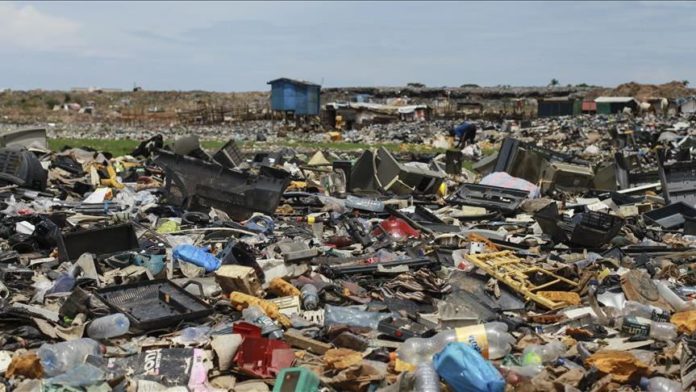 The world produced a record 53.6 million tons of electronic waste in 2019, the weight of 350 big cruise ships, a UN report said on Thursday.

The report said the e-waste – discarded products with a battery or plug – surged 21% over the past five years, predicting that it will reach 74 million tons by 2030, almost a doubling of electronic waste in just 16 years.

“E-waste is a health and environmental hazard, containing toxic additives or hazardous substances such as mercury, which damages the human brain and coordination system,” said the report.

“An estimated 50 tonnes of mercury — used in monitors, PCBs [printed circuit boards], and fluorescent and energy-saving light sources — are contained in undocumented flows of e-waste annually.”

In the middle- and low-income countries, the e-waste management infrastructure is not fully developed, and in some cases, it is entirely absent.

“Hence, e-waste is managed mostly by the informal sector. In this case, e-waste is often handled under inferior conditions, causing severe health effects to workers and the children who often live, work and play near e-waste management activities,” the report said.

Gold, silver, copper, platinum, and other high-value, recoverable materials conservatively valued at $57 billion — higher than the gross domestic product of most countries – were mostly dumped or burned rather than being collected for treatment and reuse.

Antonis Mavropoulos, president of the International Solid Waste Association, said at an online news conference: “Governments, municipalities and the big companies involved in electronic equipment, and the waste management, have a very serious challenge.

“They have to find a way to issue the maximum quality of recycling with children’s environmental protection, without affecting the livelihood of poor people attending to the informal sector. And I think this is a serious governance problem we have.”

One of the key findings from the E-waste Monitor is that proper e-waste management can help mitigate global warming.

In 2019, an estimated 98 million tons of CO2-equivalents were released into the atmosphere from discarded fridges and air-conditioners, contributing roughly 0.3 percent of global greenhouse gas emissions.