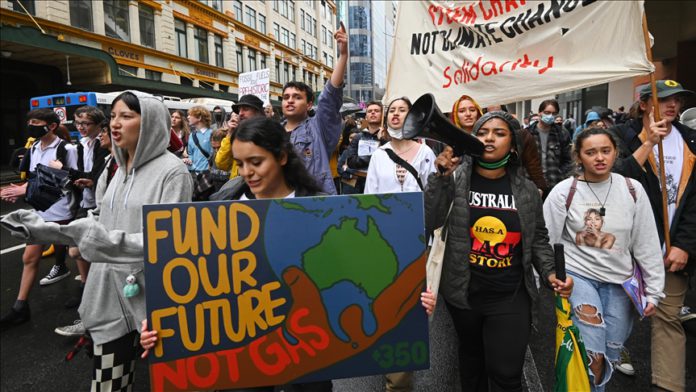 Strikes, demonstrations, and protests for the environment continued across the globe in the fifth month of 2021, with protesters demanding more decisive action to tackle climate change.

Activists and citizens continued online campaigns and street protests while keeping socially distant due to the coronavirus pandemic.

– Climate activists and environmental protesters around the world hold “StandWithWorkers” social media campaign to show solidarity with workers for International Workers Day, “as they’re on the frontlines of climate change.”

– Reminding that at least 20 journalists died as a result of reporting on environmental destruction over the past decade, Fridays For Future shares solidarity with journalists who are being persecuted for their work on World Press Freedom Day.

– On the first Fridays for Future strike of the month, climate activists and environmental protesters continue to raise awareness about climate change which is also supported and retweeted by nonprofits’ Twitter account.

– Environmental organizations, including Greenpeace, 350 and Fridays For Future share their pleasure through social media about announcement by Standard Chartered, a British multinational banking and financial services company, to stop funding fossil fuels this year.

– Extinction Rebellion co-founder Gail Bradbrook is arrested by officers from Metropolitan Police at her home in Stroud, south central England.

– Campaigners from “Paid to pollute” takes UK government to court to pull plug on public payments for “big polluters.” “The government has wasted billions of pounds of public money propping up the oil and gas industry,” they say.

– A day after her arrest, Bradbrook is released.

– 16-year-old Ugandan environmental activist Laura Muwanguzi calls for saving Bugoma forest because it “is still under danger because of the selfish desires of people,” she says on Twitter by holding sign regarding issue.

– On the day of Shell’s Annual General Meeting, Fridays for Future movement call for dismantling the company and fair reparations for those affected by its activities.

– Climate activist groups and environmental organizations share solidarity with Palestinians against settler-colonization by mentioning that they stand against all forms of colonialism and systematic repression.

– On his 46th week of school strike, 12-year-old Indian climate activist Aarav Seth says on Twitter that he stands for the cause so our future generations have better place to stand.

– Fridays for Future Amazon calls on environmental activists around the world “to stand against (Brazil’s President Jair) Bolsonaro and to support Amazonia.