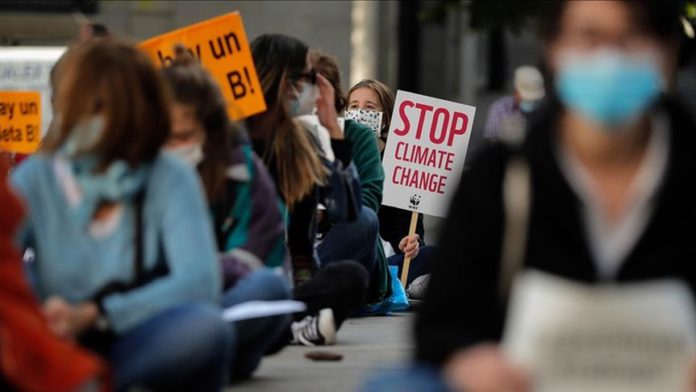 Strikes, demonstrations and protests for the environment continued across the globe in the sixth month of 2021, with protesters demanding more decisive action to tackle climate change.

Activists and citizens continued online campaigns and street protests while keeping socially distant due to the coronavirus pandemic.

Events during the month included the Fridays for Future protests launched in 2018 by Swedish environmental activist Greta Thunberg and various campaigns worldwide against anti-environmental practices and attitudes, including demonstrations near the venue of a G7 summit and several virtual climate strikes.

– On the first Fridays for Future strike of the month, climate activists and environmental protesters continue to raise awareness about climate change in efforts supported and retweeted by nonprofits.

– Environmental groups show solidarity with indigenous communities around the globe following tragic reports of missing and murdered indigenous women and girls in Canada.

– Climate activists around the world hold physical and virtual demonstrations for World Environment Day, stressing the role of a healthy environment for a healthy future.

– “Not activism, but the destruction of our livelihoods must be criminalized,” Fridays for Future movement says on Twitter in solidarity with activists in Switzerland for a new anti-terror law in the country.

– Climate activists express satisfaction over the termination of the Keystone XL Pipeline Project in Canada which was constantly criticized by environmental organizations.

– A group of climate activists, environmental protesters hold a demonstration in Falmouth in the UK, pointing out the “historical responsibilities” of the wealthiest countries ahead of a G7 Summit.

– Extinction Rebellion activists in French Guiana hanging banners on sculptures to protest for the prohibition of cyanide use.

– Climate activists gather at Cornwall to protest a G7 meeting and call on world leaders to act against climate change.

– Fourteen-year-old Turkish climate and environmental activist Yagmur Ocak completes her 100th week of climate striking. “Now is the time to unite and to continue fighting for our future together with all climate activists,” she writes on Twitter.

– Four Extinction Rebellion activists entered the Royal Ascot race track in the UK with a banner reading “Racing to extinction” and calling on Queen Elizabeth II to “act now” in the face of biodiversity loss and climate emergency.

– Some activists stay inside the Science Museum, London overnight to demand the museum drop Shell’s sponsorship.

– Youth For Climate Turkey launches an online petition campaign to include climate change in the curriculum in the country.

– “As the climate crisis intensifies, more people from most affected areas will be displaced,” the Fridays for Future Movement says on Twitter on the occasion of World Refugee Day, demanding the protection of migrants, refugees and addressing the root causes of displacement.

– Climate and environmental activists continue protesting for action on climate change and the environment, demanding more action from world leaders.

– A group of activists in Sweden, including Greta Thunberg, hold a protest outside parliament, celebrating midsummer.